I know what you’re thinking – and you’re wrong. This is not your typical platformer, and it’s certainly not meant for kids (although you can play it with them if you feel like it). Lost Words: Beyond the Page is, essentially, two games in one. Both are platformers, yes, but they’re very different beasts.

Have you heard of Rhianna Pratchett? You know, the daughter of Sir Terry Pratchett. She had joined forces with Sketchbook Games to write the story of Lost Words, and this is, in fact, the most important feature of the game. Especially considering that she inherited a slice of her dad’s talent (to say the least).

Therefore the story is the right place to begin this review with. The game has two protagonists… or maybe it’s one protagonist in two parallel worlds? Anyway, the game starts with a young girl, named Izzy (or Isabelle Barbara Cooke), receiving a journal from her beloved Gran. This is where the action sets off. Izzy writes about her life, sentence after sentence, while you control her little avatar and jump between words on journal’s pages in 2D. I’ll tell more about the gameplay later, but let’s focus on the story for now.

So, Izzy introduces herself and her family to us – turning our attention especially to Gran – and reveals that she wants to become a writer. She creates her own fantasy world, called Estoria, and puts a young heroine in it, named… well, that’s for you to decide: Grace, Georgia, or Robyn. We meet this second protagonist when she’s going through a rite of passage to replace her beloved Elder Ava as the Guardian of the village where she lives, wielding magical powers to defend it from evil. 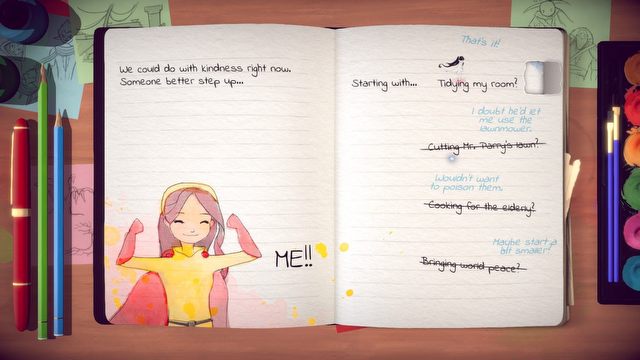 It's often impossible not to smile when Izzy is in good mood. She's such a joyful, clever kid... when life isn't trying to take all hope from her, that is.

However, on the very next day, the village faces a threat greater than anyone has ever known. The other protagonist helplessly watches a giant dragon attack her home. All she can do is save as many friends as possible, and then to begin the pursue after the beast to get revenge… Or maybe just some answers? Again, that’s up to you to decide. Anyway, at this point of the story, things also go south for Izzy in real life. The Gran suffers a stroke…

Not impressed? Do you think that the premise of the story is kinda dull? That’s okay, at this point I wasn’t very impressed either. However, I was already engrossed in the story and determined to see it through. The reason for that were emotions. Lost Words does a tremendous job conveying the protagonist’s feelings to the player, even though it uses only two forms of communication: Izzy’s voice and her writings in the journal.

You immediately know what mood she’s in, thanks to her tone combined with the way she writes. Sometimes additional effects are used, like colorful drawings on margins, torn pages, or tears dropping on paper. All this makes Izzy a likable, believable, and surprisingly deep character, even though she can’t be more than 10 years old (her exact age is unknown). It’s important because we witness some difficult moments in her life. When she’s dealing with loss, sadness, anger, hopelessness, you’re dealing with it at her side. Such powerful is the narrative in Lost Words. 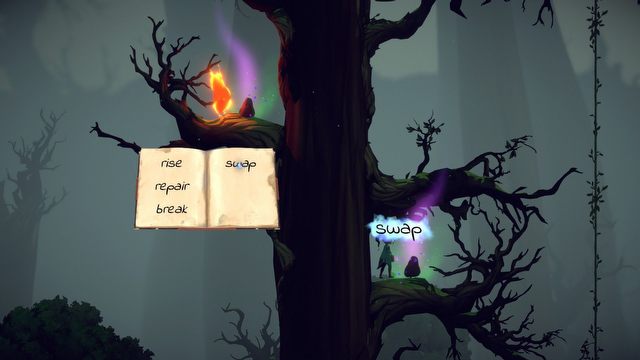 The idea for magic in Estoria is great, but it deserved better realization. 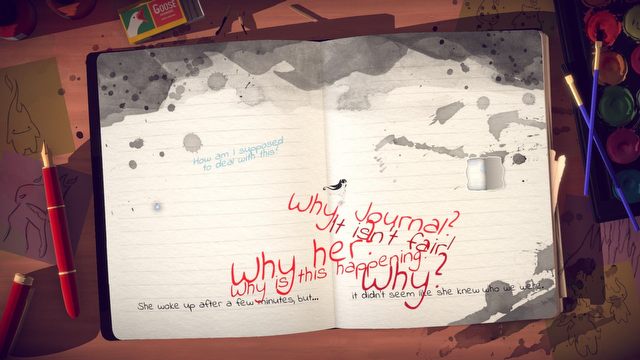 It may be just words (and voice) but sometimes the emotions they contain are overwhelming.

Unfortunately, with powerful narrative doesn’t come equally powerful gameplay. It isn’t a problem in 2D sequences, i.e. in the journal. Estoria is where issues are noticeable. Roughly half of the game takes place in this fantasy realm, where perspective changes to 2.5D side-scroll. In this part, Lost Words actually is a typical platformer… but not very thrilling, I’m afraid.

It’s just pretty basic. There is nothing that could be called a challenge, neither the enemies, nor the traps and other obstacles, nor even puzzles. I probably wouldn’t mind if the level design wasn’t so rudimentary. Even optional collectibles are placed in such a way that it’s really difficult to miss any. It’s a shame because the heroin has an interesting magic system at her disposal. You have to open your enchanted book, choose an appropriate spell and use it by manually targeting the correct object (e.g. hit a destroyed bridge with a repair spell). I wish the game offered a more interactive environment, allowing for more imaginative usage of magic.

2.5D sequences become more interesting past half of the story, when Izzy’s strong emotions start to directly affect the events unfolding in Estoria. The closer to the culmination, the more intriguing they are, and the ending itself (which is quite unexpected) leaves you with a powerful message. However, before you get there, you have to spend two hours (almost half of the game) on running, jumping, solving mundane problems with spells, and listening to rather dull dialogs (occasionally also crawling and pushing some objects, and… nothing more). 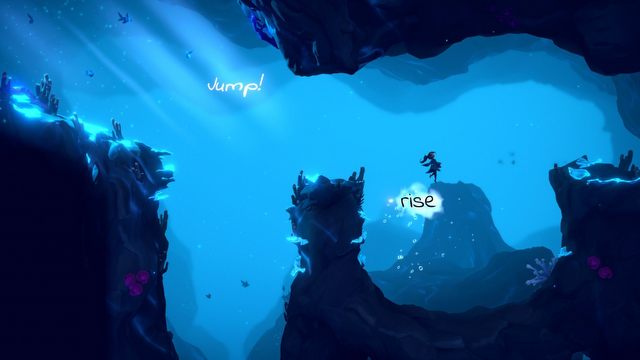 Adventures in Estoria might be a bit dull, but at least the realm looks nice... 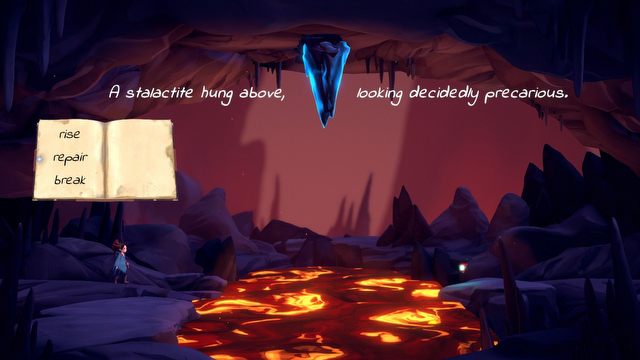 ...or at least most of it looks nice. Some places, however, could use more love from environmental artists. The same goes for animations.

Fortunately, before you can get bored with adventures in Estoria, Izzy concludes a chapter of her fantasy story and returns to real life. And that’s where the game truly shines. Truth be told, 2D sequences, consisting of jumping and solving simple puzzles, are as easy as these in 2.5D, but it doesn’t matter here. Let me explain why.

The difference is that in sequences taking place in Estoria, Lost Words tries to be a competent platformer, no less compelling than, say, Trine 2 – and it fails. Journal “levels,” on the other hand, are narrative-driven, using gameplay only as a small addition to the story – something to keep your eyes and hands busy while listening to Izzy’s voice. Think of What Remains of Edith Finch for reference, where walking around the house and playing minigames served as a decoration to the story told by Edith. Lost Words uses a somewhat similar premise with equally great effect, even if it has much simpler visuals.

You might draw a conclusion from this review that Lost Words consists of two layers; an excellent one and one that’s subpar. It’s not that simple, though. The whole game is much better than the sum of its parts. To fully understand it, you just need to play it yourself and reach the point in the story where those two layers finally merge, delivering a mighty emotional thrill. All in all, Izzy has a brilliant tale to tell, one that will get you hooked no matter if you’re 12, 22, or 42 years old. It’s relatable for everyone. Just don’t pick up Lost Words looking for challenges. And please, try to be understanding for its trivial platforming. 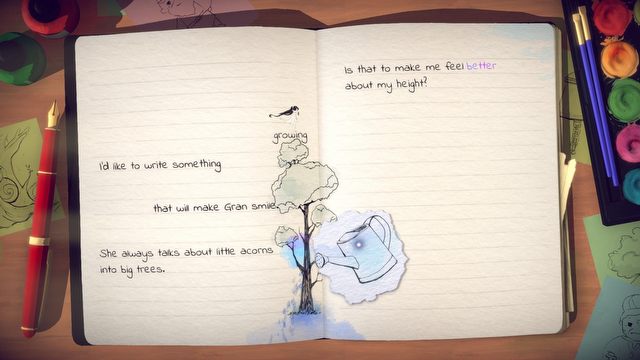 Puzzles in the journal are very simple, yet enjoyable nonetheless. 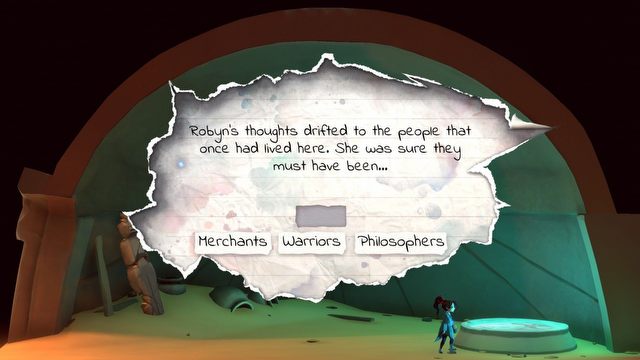 Choices don't change anything important in the story, but it's good to have one more layer of interactivity in this otherwise simple game. 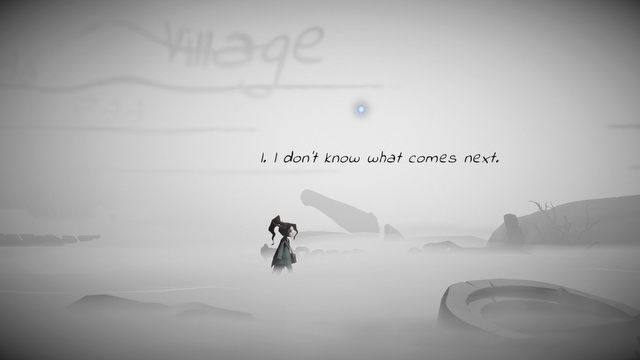