All (new) hope in multi battles

Of course, human enemies are much more challenging than the AI, so everything you can learn in the campaign and the practice grounds will come in handy. Star Wars: Squadrons unfortunately only offers two mulitplayer modes: team deathmatch and battle fleets, the main mode. In the former we don't find much finesse  just plain TDM, 5 vs. 5, whoever scores a set number of points, wins. The game feels best during battles, when the main objective becomes the destruction of the opponent's flagship: a Star Destroyer for the Empire, or the Republic's MC75 cruiser. 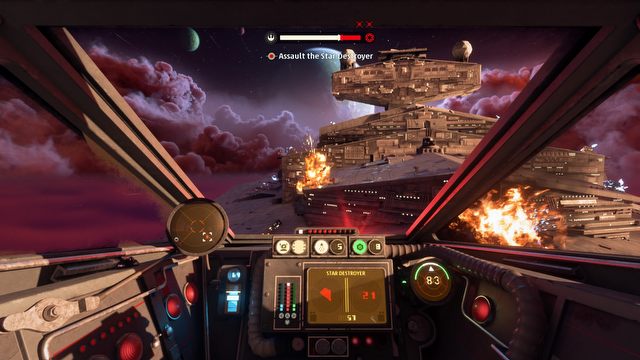 The assault on a Star Destroyer is a thrill.

The game is based on the rules of virtual tug of war, although it also has something in common with MMO boss fights (in the statistics, you can see who inflicted the given amount of damage on the enemy ships). The main resource is morale, represented by a special bar. Filling it up allows you to move on to the next stage of the attack or, if you start losing, force you to retreat to increasingly deeper defense. In general, during each battle, we will repeatedly find ourselves in both situations, once pushing forward, then retreating in a disorganized manner.

This brings the mentioned tactical layer to multiplayer, because cooperation is important even at the ship selection stage. A team consisting entirely of light A-Wings or TIE Interceptors during the final push towards the flagship is a bad idea, so having the right sense of the situation and knowing the capabilities of all ships is key. There are only five players on each side (and SI units doing the "crowd"), and they try to take care of all that. Too bad the battles aren't bigger, with more ships to destroy and more players in each team. 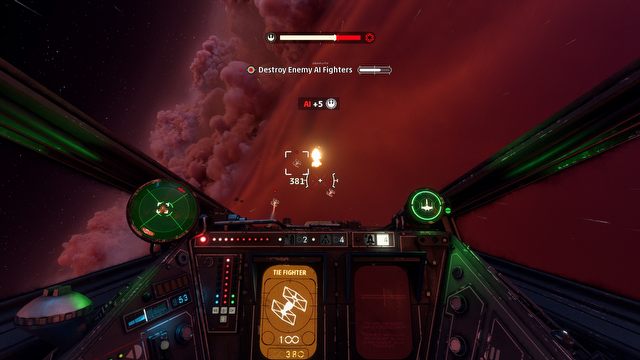 The game uses AI-controlled "mobs," which, in a way, promotes cooperation within the 5-people teams.

The sight of a Star Destroyer disintegrating after a long battle is something truly beautiful and gives plenty of satisfaction, but that's just part of the story. The "victory screen," for example, is a repetitive cut-scene, rather than animation based on gameplay. The team can't fly along the exploding ship and enjoy the view  before that could happen, everyone's kick out of the map. Is Frostbite running our of breath? 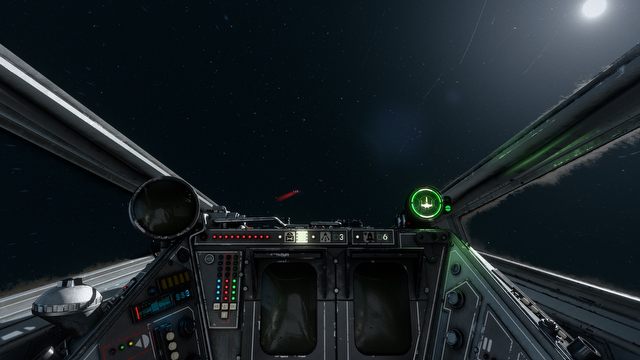 There's definitely not enough dark emptyness of space in the game.

I also got the impression that the attacks on flagships are somewhat simplified and that the morale bar is more important than the actual destruction of the critical systems, which would probably be a more interesting solution. The AI units make it somewhat difficult to sense when the ship will be destroyed and who fired the decisive shot.

The biggest problem of Squadrons is the amount of content. All the fights are carried out according to the same pattern, without the slightest dose of randomness, save for rotating maps (six of them in total, all quite similar), so this doesn't bode well for the game's lifespan. The creators have no plans for new content thus far, and the only motivation seems to be offered by a handful of cosmetic items and a ranking system. The upside, however, is that everything in the game is acquired through gameplay  there are no micropayments! 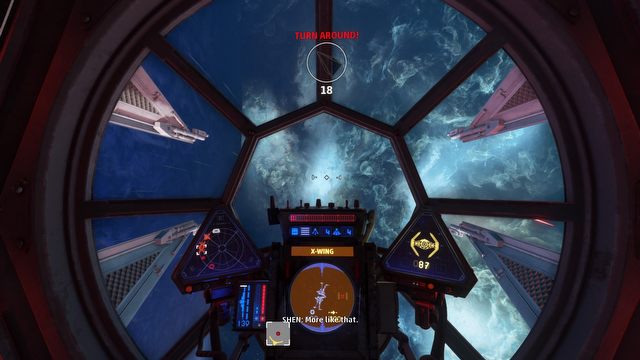 The game uses artificial constraints of space, so it seems quite small.

I'm still waiting to see a map that would just show dark, empty void of space. All the locations are as colourful as a garden in late spring, and there's always some background with clouds or some other nebulae. It's a bit like in the FPS from the 90s, in which levels with 3D corridors were filled with static images. This, combined with quite conservative constraints of space (if you fly to far away from the center of action, your ship automatically turns around), makes for a rather claustrophobic vibe of the entire game. The black void of the cosmos would add some depth and space. I also miss a map set directly above the surface of a planet. 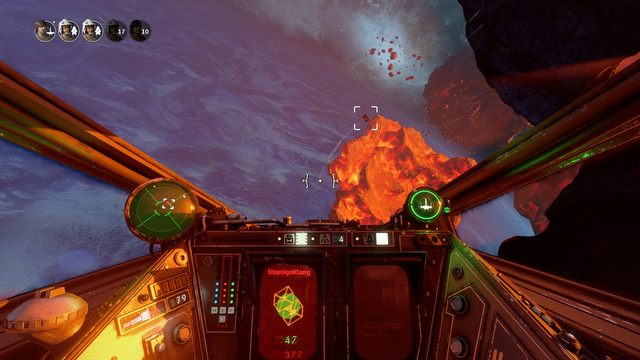 MP is fantastic, but there are just two game modes, and too few maps.

Many of the drawbacks become insignificant once we start playing in VR. The freedom to look around and the sense of immersion make it all about the opponent in the crosshair; the fight right here and right now, rather than the number of available modes. In this respect, Star Wars: Squadrons seems a big step forward compared to the previous X-Wing Mission VR demo for PS4. It shows that VR is simply made for simulators. 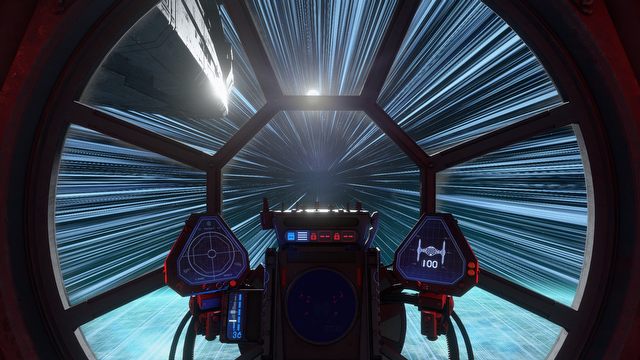 Hyperspace jumps in VR are a real trip!

Such equipment, however, is still the exception rather than the norm for players, as are HOTAS kits, and this makes Squadrons potentially a very different kind of experience. It will be a fairly difficult game with little content and a weak plot for many players. For others, it's going to be an opportunity to put their hardware to use, or remember what Star Wars games felt like back in the day. It may not make the same impression as these old titles used to, but it's good that the gaming world has finally brought back the space dogfights of X-Wings and TIE Fighters. Perhaps the next installment will show us interstellar battles on a grand, epic scale?

I spent several hours with Star Wars: Squadrons  first on the PS4, testing the game on dualshock, and then on the PC with a HOTAS set. It took me about seven hours to get through the campaign consisting of 14 missions, much of the time spent passively listening and waiting. The game awards medals for completing each mission below a certain time limit  usually 15-17 minutes.

I've had much better time in multi, which actually hasn't bored me yet, but I'm not sure whether that will last. I used to play all these games, starting from the first X-Wing to Alliance and the arcade rail shooter Rebel Assault. Squadrons is by far the least "epic" of all these games.