As all of you are perfectly aware, July is a month usually eschewed by major publishers when choosing release dates for their games. And I appreciate that, as it makes summer the season of indie gems, allowing them to shine brighter. However, The Ascent is such a wonderful gem it could get everyone’s attention even in October or November, among the hottest releases of the year. Just look at it. You don’t really think that game with visuals so striking could pass by unnoticed, do you?

Cyberpunk in a galaxy far, far away 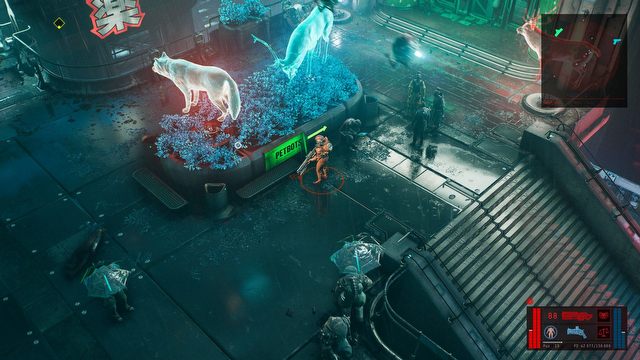 There are surprises and fine details around every corner in The Ascent.
PROS:CONS:

Thankfully, graphics is not everything The Ascent has to offer. It is just as charming gameplay-wise. Honestly, I can’t wrap my mind around the fact how a studio so small (Neon Giant consists only of dozen or so people) was able to create a game so vast in scope and spend just three years doing it. All those incredibly detailed and diverse environments, rich lore, polished gameplay… That’s true, Neon Giant is an experienced bunch of developers, but still, I’m astounded.

You know, these guys managed to create a cyberpunk world that’s almost more believable than CDP Red’s Night City. Almost. There are civilians who react adequately when you start terrorizing them, i.e. run for their lives and don’t ever stop, living crowds on the streets, people talking, and even a functional metro (take that, CD Projekt!). Walking around the streets on the planet Veles, “listening” to quirky conversations of freakish NPCs (they’re usually not voiced), and staring at details of this world is sometimes even more joyful than running and gunning. And the latter is very joyful. 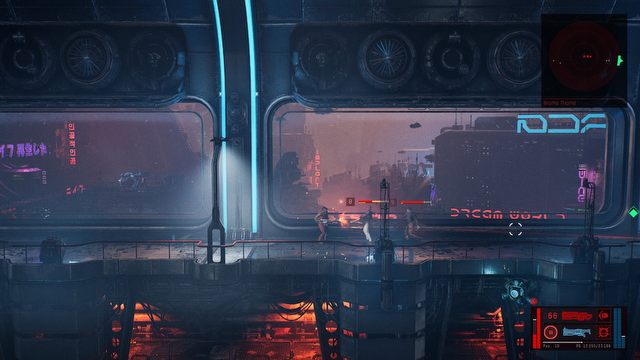 You may wonder how comparable is The Ascent to Diablo. Blizzard’s action-RPG was obvious source of inspiration for Neon Giant in some aspects, yet those two games are quite different in general. The Ascent has no character classes, no skill trees, and no randomly generated levels or items. Oh, and it’s focused solely on shooting, without any means of hand-to-hand combat. Nonetheless, it does involve some RPG elements, like customizing your character’s looks, leveling up, changing gear, and improving stats. Nothing too deep (regrettably) but it’s there. 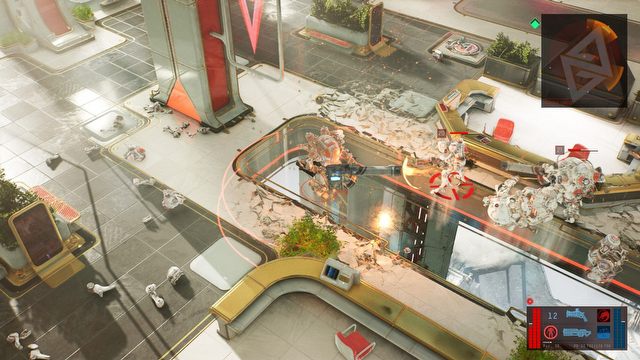 Jumping into a "pocket mech" makes you feel immensely powerful.

We should talk about shooting then. Well, it’s brilliant. You can feel every bullet as your enemies lose their limbs in bloody explosions and the environment becomes shattered. A bit of tactical thinking is required, as you won’t last long on the battlefield if you don’t use cover. However, you can’t duck for too long, because grenades and grunts with melee weapons will quickly force you to change position. You could try to dodge bullets, but I’m afraid it won’t suffice when you are surrounded by many enemies (which you usually are). Oh, and take notice if you’re aiming high, or low; the former makes you move slower but allows to score headshots more frequently and to hit bigger foes over the heads of smaller cannon fodder. Yeah, there are some fun nuances.

Fortunately, guns aren’t the only tools you can use in combat. There are also tactical gadgets and cybernetical enhancements that allows you, for instance, to slow down projectiles around you, summon explosive spiderbots or jump into a “pocket mech." Sounds good, doesn’t it? These tools are the equivalent of abilities you acquire from skill trees in traditional action-RPGs and they give you possibilites that are not only effective but also spectacular. However, we could use more precise descriptions of their functionality and more diversity in items. 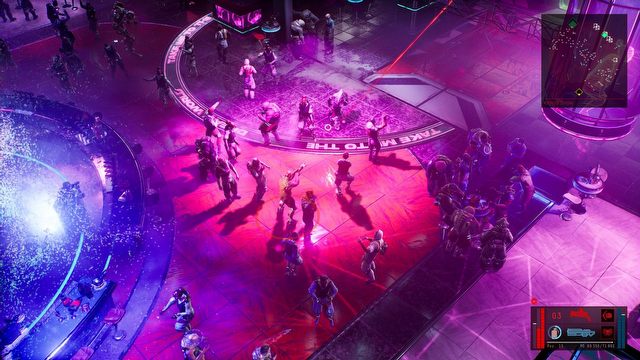 Remarkable electronic music is another important factor in making combat so exhilirating. 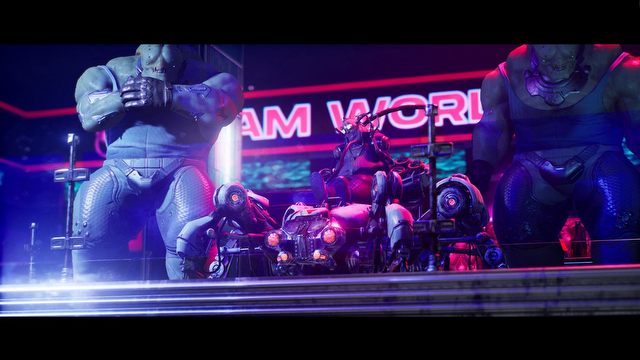 Cut-scenes are on par even with some AAA games.

Weapons and armors could definitely use more variety as well. I’d like them to have randomly generated stats, so that I wouldn’t find the same pistol or jacket again and again. Moreover, there are no unique or epic items that’d grant you some special effects. The rarest pieces of equipment deal more damage or give you better protection with greater bonuses to some basic stats, and that’s it. Therefore, opening chests and collecting loot isn’t too exciting. The same goes for leveling up; it gives you just skill points to divide between eight boring stats, e.g. health points, recoil reduction or critical hit chance.

Speaking of boredom, traversing the world is sometimes a chore. The Ascent involves a great deal of backtracking, so you’re going to spend a lot of time visiting some places again and again due to limited fast-travel options and vastness of levels. They look gorgeous, yes, but that doesn’t help when you have to go to the same elevator and kill the same enemies for tenth time since neither metro, nor taxi connects different floors of the arcology (that’s the name for the enormous city where The Ascent takes place). Besides, navigating around some areas proves troublesome because the map is poorly designed. 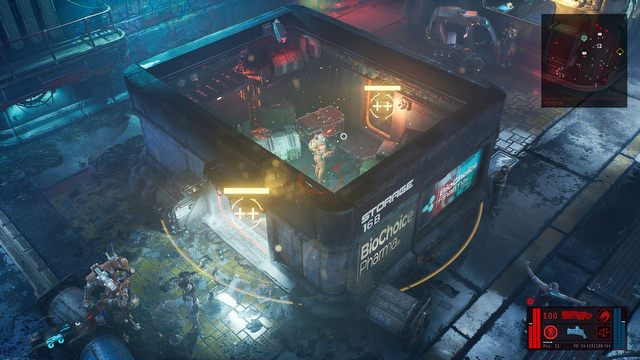 Being a cyberpunk game, The Ascent has obligatory hacking. However, there is no minigame attached to it.

Backtracking may become more annoying if you aren’t a skilled player and die on regular basis. Repeating fights often requires you to cover some distance (and skip a cut-scene), as checkpoints tend to be placed in odd spots. Unfortunately, the difficulty level cannot be lowered nor raised (if you consider yourself a hardcore gamer). All you can do to overcome obstacles is to ask some friends for help and invite them to play with you in the co-op mode (local or online).

I found some fights to be frustrating (especially in the second half of the game, where devs seemed to run out of budget for implementing creative new challenges and instead put overwhelming swarms of lesser enemies between you and the goal), yet I was handsomely rewarded after every beaten hurdle. No, this isn’t about some shiny gear or tone of experience points. Actually, the chance to visit another stunning place on Veles and to reveal another piece of the rich lore was all I needed to keep me engaged. And that's even if the story itself, concerning a mysterious fall of the eponymous Ascent Group corp., wasn’t very captivating (with the exception of some dialogues and cut-scenes; the latter turned out to be surprisingly well animated for an indie studio).

Another gem for Xbox Game Pass 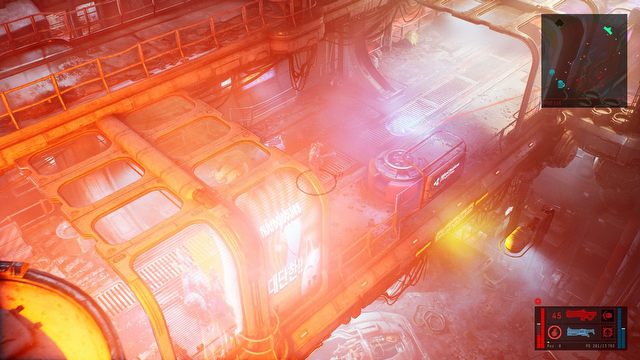 Despite stunning visuals, The Ascent has reasonable system requirements. My GeForce RTX 2080 ran at ca. 100 FPS on ultra settings for most of the time. 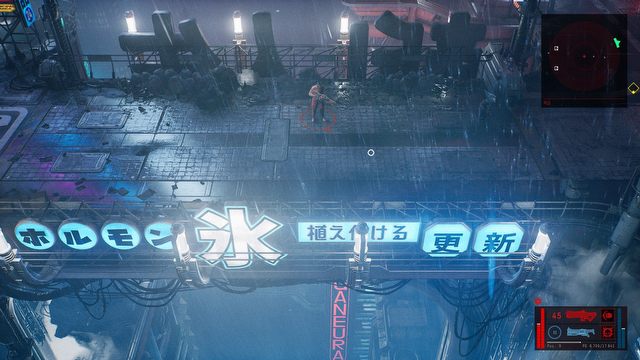 Delaying playing The Ascent could also give devs time to squeeze some bugs in the game, e.g. malfunctioning AI and V-sync.

It's time for answering the ultimate question: is The Ascent worth your while? Yes, absolutely. It should give you at least 10–15 hours of stylish fun, especially if you grab some friends and play in co-op. You may think it’s not proper length for an action-RPG, but considering the price ($35), the fact you can play it via Xbox Game Pass from day one, and the healthy dose of adrenaline awaiting you here, I believe it’s more than enough.

However, if you don’t feel a desperate need of sinking teeth into a new game, it could be wise to wait some more time before starting The Ascent. I’m certain the devs will support this title for many months to come, addressing it’s most urgent issues, i.e. stiff difficulty level, poorly implemented fast travel or lack of endgame (including insufficient depth of itemization). Before the end of the quarter, the game could be upgraded enough to deserve a score like 8.5, and in the long term, I can imagine it ascending even higher. But can you resist these graphics?

According to our users, The Ascent for PC was a disappointment - the expectations before the release were higher than the current average user score.