For example that cats are preferable to romantic relationships. Recently I've been told that every day is Women's Day. That's why today, in the educational corner (where everything’s always completely serious) we're going to tackle house chores. After all, that's the first thing that comes to mind when you hear "woman."

And the second thing? The Sims, of course. The third is laundry, but that's already been discussed. 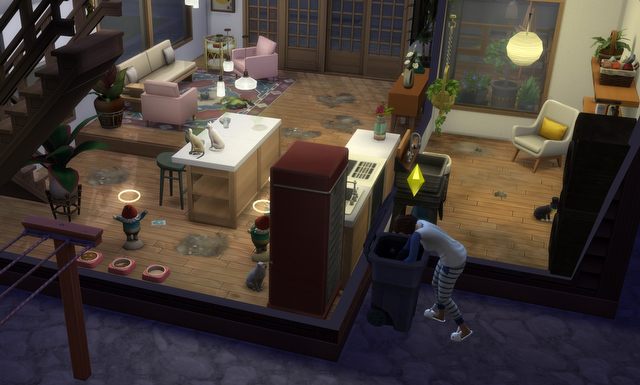 Life of a hot mess

It's not that I'm a mess. I mean – it's not that I'm THAT much of a mess. I've just never really felt the categorical imperative of cleanliness that would make me collect all the socks sprawled luxuriously all over the carpet, wash the dishes regularly, vacuum, or do the laundry.... Wait a sec – you know what? Laundry is an exception. But making the bed, picking up receipts from the floor, washing said floor, polishing shoes, cleaning furniture... Just say no.

I don't feel it. Theoretically, I should be doing all this in the name of preserving some sort of higher order, I guess.

Now, I’ve got no time to lose on bs like that. And after these several hours with Bust the Dust kit that's even smaller than stuff packs, I've come to a conclusion that for me, this is the most relevant DLC so far. Dogs and Cats can't even hold a candle to it. Not even the laundry thing. Dirt, dust and vacuum cleaners. And cute bunnies. 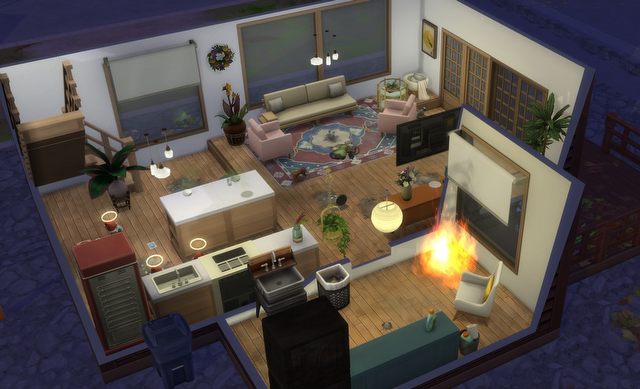 Here's why: As I wrote above, I've been through this. Cooking in a grimy kitchen? Check. Friendship with dust? Tell me more. Spoiled food, bathroom that's not all spick-and-span, having guests in a slimy environment...? The parables ended when my furious alter-ego had to knock over the trash can – three times. Now, this is a red line for me, but I did try it in The Sims, of course. Oh, how many times I tried! But my good ol' Karen wasn’t up to the challenge. I made her enemies, forced her to play games – nothing would make her mad. So I had to go to the extreme and I made her wife flirt with their colleague from Komorebi before her very own eyes. It worked instantly. But still, no matter how much trash I produced and threw out, the trash can remained sternly indifferent. So, as far as this aspiration is concerned, I didn't quite cut it, neither irl, nor in The Sims.

Despite all that, I felt great. There were heaps of dust all around my Sims' house and pecks of dust swaying in the air. Good and bad dust bunnies moved into the apartment and I befriended them. New cats kept showing up on my lot that was filled with cats anyway, and they were meowing so hard that my husband would ask me from the distance of his room to turn this howling down ("Dude, I have to listen to FIFA in four languages, gimme a break"). Things broke one after another, something was on fire basically all the time, volcanoes erupted, firemen slept on my couch, cats vomited all over the floor, every flat surface was packed with dirty and smelly dishes, there were piles of sweaty clothes everywhere, the washing machine was still unloaded, garbage started to bloom and fruit in my garden, and finally, the circus was joined by dwarves spawning seed packets for the harvest holiday. Madhouse. The Sims have never felt more satisfying.

Along with Bust the Dust, two other kits were released – Throwback Fit and Country Kitchen. Generally, I just can't stand the rustic style in The Sims. There's absolutely nothing I like about it, no matter if it's wicker, wood or a plain sheet of veneer without any texture. But there's one thing the developers did right. The refrigerator. The refrigerator we get in Country Kitchen is my dream refrigerator. In real life and in the game. In all these beautiful colors. We also get a "vintage" gas stove, some countertop decorative stuff and a set of kitchen cabinets in colors that match the other rustic cabinets in the collection.

Throwback Fit Most of us in the 1990s were poor, but happy, and stayed in the country all the time, because our parents couldn't afford all-inclusive vacations in Egypt or Croatia, and the Fiats used to disintegrate while roaming the potholed Polish roads. But those times were different in The Sims. Those were the days when Sims dressed in such a way that I'd love to dress like that now too. These bold and unfaded colors! These patterns! The kids got new clothes too – that's good direction, Maxis, give us more of that, please. 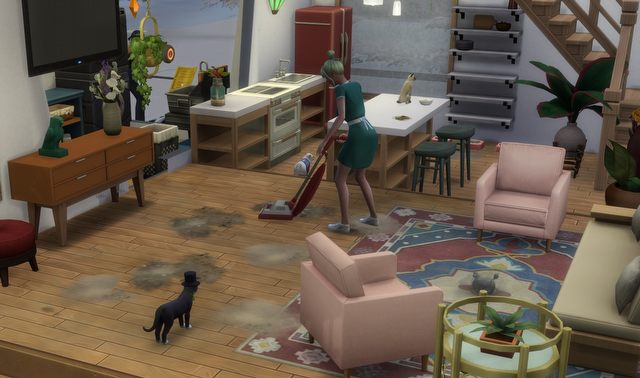 The second reason is the second aspiration I imposed on my sim Karen, which I did out of sheer decency and integrity (because, let's be honest, who needs it anyway?). Perfectly tidy. As much as the life of the "fabulously filthy" was all fun and games, it's safe to say that being perfectly clean has been the busiest time I've had since at least several months, maybe more. Because it was a time when I had to clean it all up. And then, I immediately got busy making a mess again, so I could have something to clean later. It's an important differentiation – clean and not clean. Clean the shower, wash the dishes, vacuum like hell, do the laundry.

Do you think two people can't turn the house into a big pile of dirt? I did the laundry twice a day. I was constantly washing the dishes. I was constantly taking out the trash, wiping the dust, vacuuming the bunnies, (and generally vacuuming all the time), putting out fires, mopping floors, repairing appliances and replacing burned things with new ones. On top of that, I still had to cook. My Sims were unemployed. Otherwise, they simply wouldn't be able to handle all the chores. The dust kept coming. The bunnies kept invading.

Those of you who clean regularly, know. Either you do the same thing over and over, day after day, or you do it once a week or month, only it 10 times as long then, and you have to be more thorough. There’s no other way. And it takes away a lot of your day. Laundry, cleaning, shopping, cooking. There’s little time left for entertainment. And when you add in the worktime, there's practically no time left at all.

Maxis has finally created the perfect and true life rendition – at least of my own life. And just like in reality – I choose dirt. However, if you prefer to clean and you take pride in your shiny floors, you'll have your hands full. Cleaning combined with laundry will make The Sims a strategy game. In the end, however, the truth always becomes apparent, and even the developers of the kit couldn't escape it. Clean apartments are reserved for those who pay to have them cleaned. Dear Ladies, whether you like to clean or not, this is what I wish for you – having the choice. Every day. Always.

The text was written in cooperation with Electronic Arts.

According to our users, The Sims 4 for PC was a disappointment - the expectations before the release were higher than the current average user score.