So far, my favorite pass-time activity of 2021 is sitting on a couch and forcing Eivor with my thumbs to perform daring quests. The occasional breaks I have are devoted to Miles. Sometimes Marianne. Assassin's Creed: Valhalla, Spider-Man: Miles Morales and The Medium have at least one thing in common, namely cats, which is a key feature of any game as far as I'm concerned (that's why I'm playing Control next, and when the time comes, I'll definitely try Stray). It took a while, but developers have clearly begun to appreciate the value of feline presence in games. They appreciated it so much, in fact, that relationships with the cats sometimes seem to run deeper than those with humans.

It doesn't bother me at all.

February 14 is an important day  joyful, anticipated, dedicated to our LIs, if we may call it that. A reason to celebrate! What's the occasion? 174 days until Cat Day!!!

Has your cat ever let you down? Ever? Did it ever say anything unkind? Did it ever forgot to turn the lights off in the bathroom? I bet it never did. The relationship with the cat is based on rules that are clearly laid out, and worked out: you feed cats as need feedin', clean the litter box as needs cleanin', and pet them as need pettin'. In return, you're granted a special privilege: you're allowed to be the person feeding the cat, cleaning the litter box, and petting when required. The depth and maturity of this relationship is irrefutable.

But how does it compare to relationships with humans in the recently released cat games, Valhalla and Miles Morales? 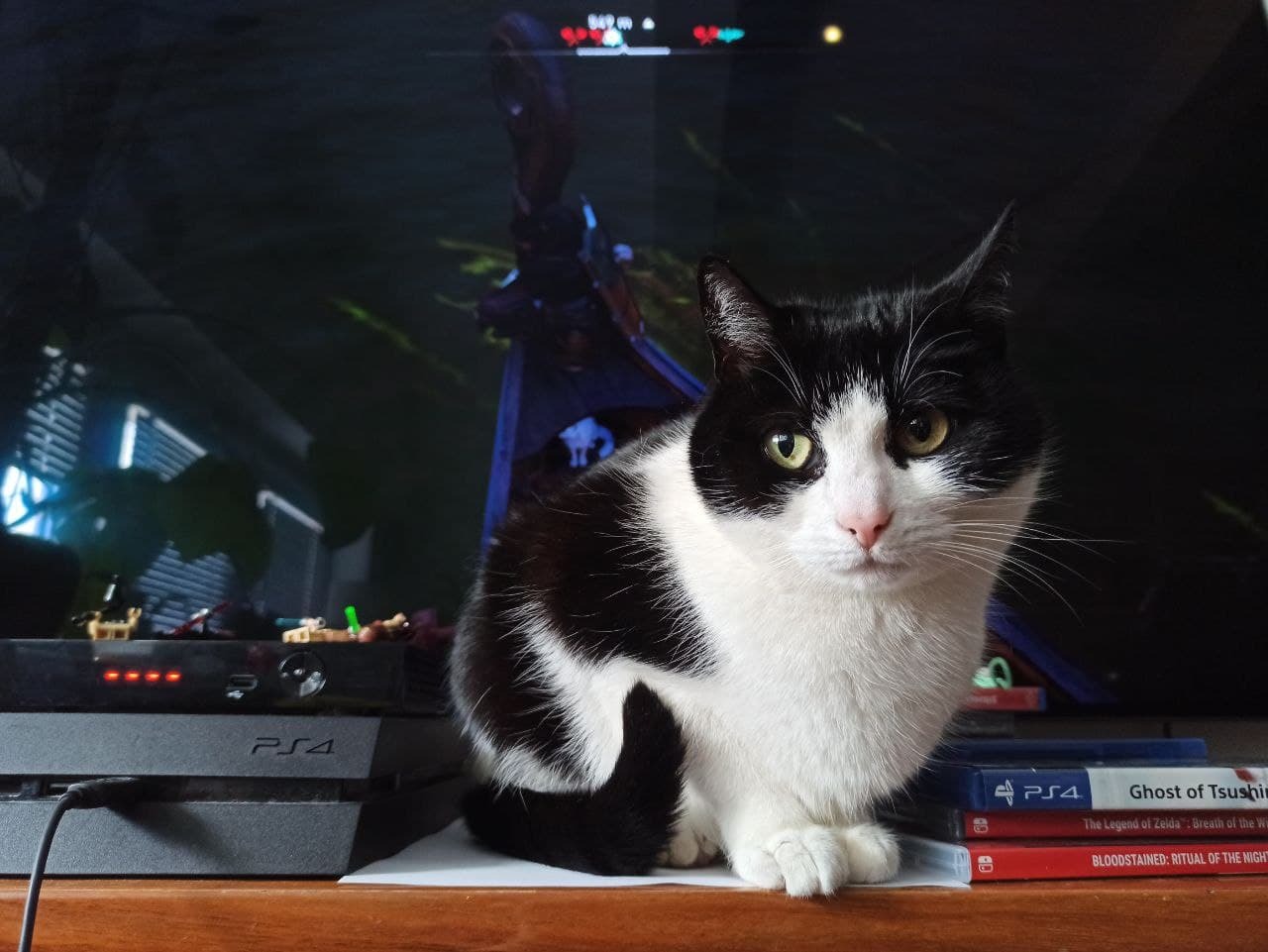 My cat clearly loves me madly, cant you tell? Oh, and theres the cat from Assassins Creed: Valhalla behind her in case youve missed it.

Romance. In Assassin's Creed: Valhalla, we have lasting bonds with both cats and humans (and dogs, too, but they're so... philistine and callow). Some of the most popular game guides pages we have are concerned with love interests and romance  and in case of games like the latest open-world action epic from Ubistoft, I completely don't get it.

Here's what a Viking-to-Viking relationship looks like according to Ubisoft: you have a crush on your stepbrother's wife. It's mutual. One day on a walk, you finally get a chance for a roadside quickie. It's reasonably exciting so far, at least in the abstract. You decide: the brother won't notice a thing, "cuz he's not around that much" (you live in the same hut).

You're in love, and after just a few days, you have the kind of relationship that many married couples with 30 years of experience can "boast"  you talk about work, kiss only occasionally, because she never takes the initiative, you don't have time for that, and besides  it's just the same thing over and over again. Fornication also isn't the same as the first time  just a routine loading-screen. You can't even see anything interesting, because someone insists on turning the lights out. You'd like to break up with her, perhaps, but you can't, after all  you live together in the first place, and it'd seem kinda silly. Besides, for Christ's sake, she's your brother's wife, it's not right to break her heart! In search of excitement, you romance random strangers, but it always ends the same way  boredom, saturation, dissatisfaction. You are practically gone from the house. You only stop by to pick up your mail, change clothes, sleep in your own bed (alone), or have a party with friends.

Meanwhile, cats? You can cuddle, stroke, and grab cats, and you enjoy each time as if you were doing it for the first time. You travel with them, surround them with care, shielding them with your own body as you go on watery journeys together. And they bravely, nonchalantly just chill out on the boat in the midst of flaming arrows, while you barely escape with your life, doused in oil and set afire. They never turn chicken.

No drama, no complicated relationships. No disappointment, no routine, nor boredom. 140 hours later, you still watch in awe as your cat washes muzzle, and you don't need anything else from life.

Always by your side 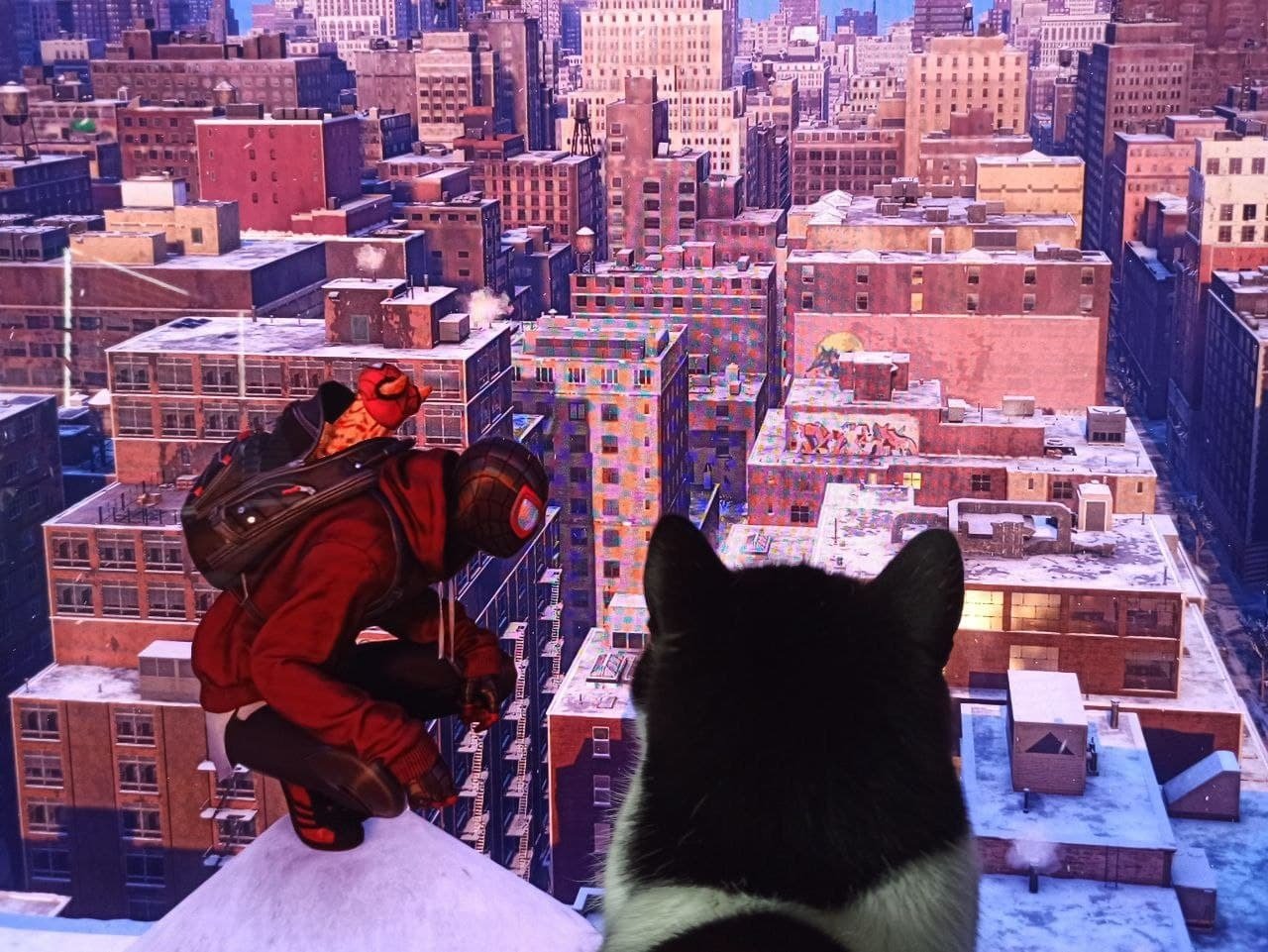 Miles Morales isn't much different. Personal relationships are rather purely platonic, and if deeper, they are so complicated and fraught with animosity that it's better not to mention. It's also hard discuss it without spoiling the plot. But take my word for it  there's no real romance in the game. Which is precisely why they decided to get cats in there.

You rescue cats like knights in shining armors used to rescue virgins. Cats of all walks of life. You can also pet the cat, of course. And once you've dealt with the main storyline, you can pack the puss in your backpack and take it for walks, streetfights, perform somersaults mid-air, do wall-runs, and ride on the roofs of police vehicles. And it will always be there, the brave puss. Its meowing during stealth sequences will never expose you.

It also won't fall out of your backpack because it's a Spider-Cat, goddamnit  gravity is just a joke. It will mind its own business and, as befits a real cutie, clean its muzzle and catch snowflakes. Sometimes it will also pat you on the head with tenderness. And if someone tries to attack you, it may even deliver a preemptive strike. The cat will also give you some space  after an exploration full of excitement, it will disappear so that you can have some time just for yourself. Perfectly balanced. Isn't that the best companion?

You could certainly find more games that make the case for cats over people  I chose the two above because they were released quite recently, cats are given some prominence, and I spent most of my free time with them since they were released. You may ask: What about The Medium? Well, Marianne doesn't get involved in any romantic relationship in the game, so she doesn't really meet the formal requirements of this article.

And so, the verdict is simple: cats are the best, and they win today's competition that I myself have announced, and the rules of which have been made completely arbitrarily by me! In case some of you still have doubts, I'll break it down for you:

I rest my case.

I'm not going to hide it: I recognize the superiority of cats not only over relationships, but also over dogs. So I consider the apparent increase in the presence of cats in games to be the best thing to happen in gaming since The Sims 2  no-brainer. I'm only interested in cats. Paws. Muzzles.