Four hundred of riddles solved, thirty cards with weird drawings, one Tetris made of the mentioned cards to sort on the floor, and a night with dreams about maze paneling – the three days I spent intensively playing “The Witness”, the newest game by Jonathan Blow, the creator of Braid, were very much out of the ordinary. So much in fact, that after countless times of frustration, and as much again of enormous satisfaction, I watched the ambiguous ending, and even more ambiguous hidden ending, and couldn’t really tell whether I liked or hated this game. After sorting out my own thoughts and feelings, I arrived at the conclusion that this is a great game – but only for few players. Others will find it to be only a (really) good puzzle game.

The Witness does a great first impression: when the world is unraveled, after a few steps in a dark corridor, it blazes with palette of pastel colors – the vibrant, saturating environment is very easy on the eye. The game does not utilize any sublime graphical effects, nor a physics engine, but successfully makes up for it with the astounding level of detail of the world and tasteful design of cleverly arranged assets. 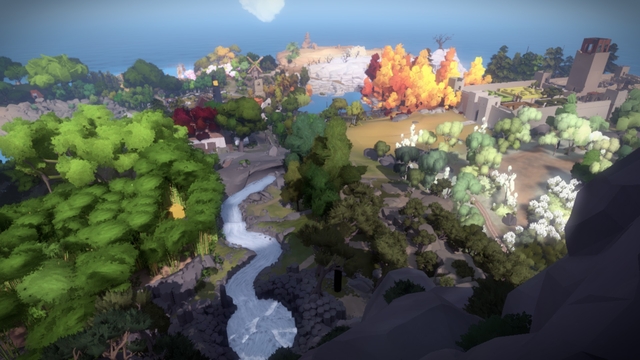 After around fifteen minutes, we leave the first area – the whole island on which the game takes place is waiting for us. I can hardly decide where to go: every building and the forest looming in the distance lures, tries to convince me that this is the place to go next. Maybe the pink cherry forest or the abandoned quarry? Or maybe the ruins in the desert, partially covered in sand? Perhaps the half-sunk wreckage of a tanker? During the first moments of “The Witness”, you can ignore the panels of riddles filling the world, and give yourself only to the pleasure of exploration. As a matter of fact, you even will be awarded for doing so, since observant players will find pieces of story, revealed by the occasionally encountered statues, and audio-logs with quotes of well-known philosophers. Frankly, I wouldn't mind if – when the retro and pixel-art trends are gone – the indie games would incorporate this kind of relatively simple, but neat and numerous 3D models.

After finally seizing to marvel at the environment, let us remind ourselves that “The Witness” is a puzzle game, not a walking simulator. At the first glance, this may seem as a single-trick-performance a lot less spectacular than manipulating the time in “Braid” or the title portals of… Portal. The island is filled with electronic panels that display mazes – our goal is to get from the entrance to the exit of a given sequence. However, we find out soon enough that the team led by Blow exploited the huge potential of this seemingly banal concept, and used it to create truly diverse challenges. 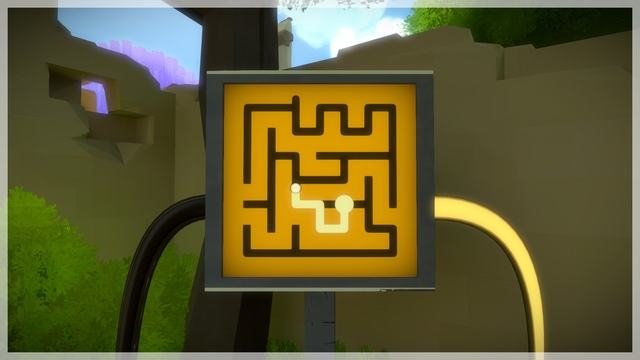 Some riddles are pretty easy, but the further you go, the more you’ll have to push yourself to your mental limits.

The riddles - simple at the beginning - gradually gain new elements – for example squares of different colors that have to be separated as we progress through a maze. Another example is a task where we have to recreate Tetris’ shapes on a panel. These obvious examples may not sound very impressive, but I wouldn't like to spoil the fun – one of its best features is how the game teaches us approaching new challenges; there are no tutorials, and no voice form the sky telling us what to do. Instead, every kind of riddle has its own set of panels, on which we solve increasingly difficult tasks – from childishly easy, to really hard ones. This clever way, we learn each of the principals and prepare for truly hard challenges. This mechanism is perfectly represented by the hidden (and according to some, the right) ending, which we theoretically can reveal at the very beginning, had it not been for the fact that we would have to know the game's mechanics first. 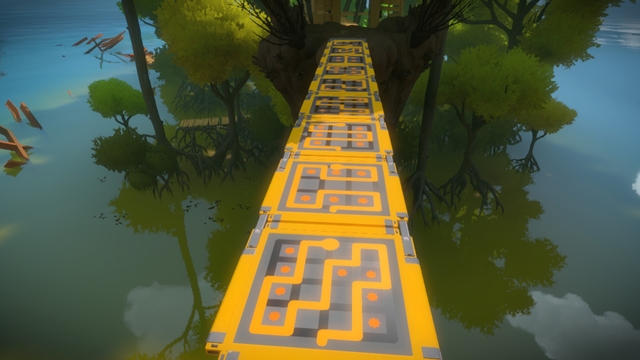 The island is divided into several regions, each containing a different kind of challenges. The first, simple riddles gradually become harder, and eventually elements from different regions will be involved as well – hence, if we face a seemingly unsolvable riddle, it is often because we don’t have the knowledge required to do so. More than once I have spent half an hour racking my brain over a panel, just to let go and leave the area. Then, I would get back after some time spent racking my brain in other parts of the island, to solve the riddle in no time. Sometimes leaving the area wasn't even necessary: the game does a wonderful job of merging the environment into the riddles themselves, so looking or listening carefully may be enough.

As stated in the press materials, “The Witness” contains as much as 650 riddles to solve. Luckily, you don't have to solve them all in order to finish the game – I have managed to solve 400, and that's well above the required minimum. I say “luckily” because even those four hundred were too much for me, and by the end I felt genuinely tired. Although “The Witness” does a marvelous job of teaching us how to cope with panels, it won't make us genius by itself – and the level of difficulty was often too high for me, and I felt as if I was playing “Dark Souls” that requires not high manual abilities, but a bright mind. 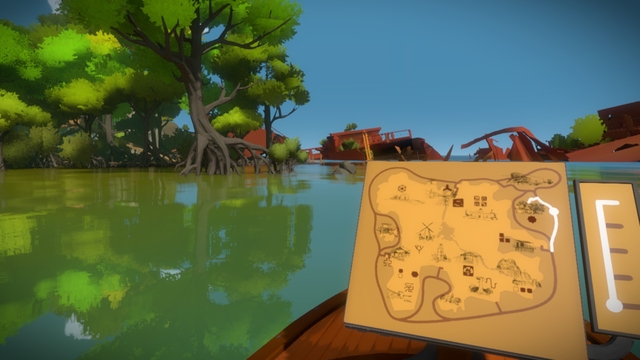 Virtual piece of paper helps you with traveling around the location, but a real one might actually be helpful with solving some puzzles.

Sometimes a short break was enough, other times – drawing everything on a piece of paper. Once I even resorted to a real floor and real paper blocks. But then there were some puzzles that I haven't solved in spite of trying for more than an hour. I like to cerebrate, but the level of difficulty sometimes seemed too high, and thus frustrating. On the other hand, when I have finally managed to solve such a puzzle, the satisfaction was enormous. This is one of the games that is best digested in small portions, instead of spending lengthy marathons of intensive thinking with it, and even then – I venture to say – it will be simply too demanding for a lot of players.

My curse was that despite that level of difficulty, Witness has sucked me in, and I was really eager to take up the challenges posed by Blow's game. A couple of riddles I still haven't solved, but I'm sure I will – trying for hours, getting frustrated, and feeling dumb, only to, since there are no unsolvable puzzles, feel that huge but short satisfaction, and get on to clash with the remaining hundreds of panels. Prodigies and masochists welcome. 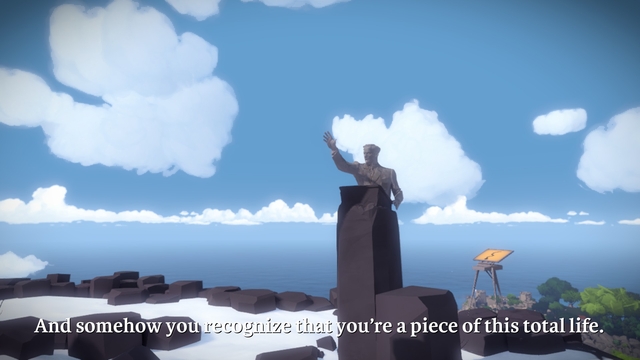 The plot is not really obvious, but all the fans of drawing far-fetched conclusions will be content.

The end is where the beginning is

“The Witness” can be finished without paying any attention to the story told by the game. Then if you do pay some attention, it may leave you confused anyway. The plot is told only through the statues and audio logs, and its conclusion is vague and subject to many different interpretations. Many people will find genius here no doubt, but it will be as scarce a group of people as those who saw “Braid” as a story of sorrow evoked by the building of the atomic bomb. For those of you who are not very keen on analyzing pieces of the story and drawing far-fetched conclusions based on them, the plot, if you'll be able to make some sense of it in the first place, won't be captivating and may even be disappointing.

The newest Jonathan Blow's production will be an outstanding title for some; another proof that video games are art. Those people may find the score too low. To be included in that group, however, two of the three following rare features of character are mandatory: above-average mental capability, patience of a saint, and love for analyzing (pop)culture's artifacts. Without such a set, “The Witness” is only going to turn out as a proper, lengthy, and very pretty puzzle game. And an extremely hard one, if you try to get to the bottom of it. 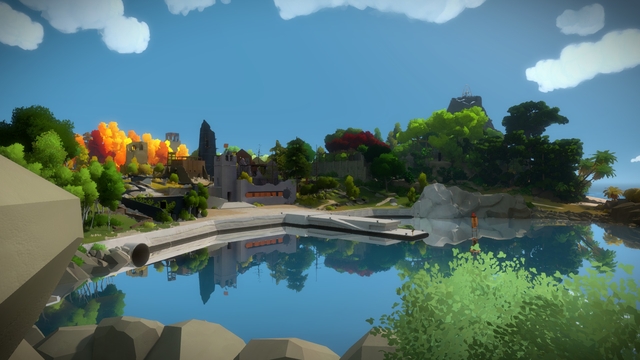 Proper, lengthy and very pretty puzzle game? Maybe, but not for all!

According to our users, The Witness for PC was a disappointment - the expectations before the release were higher than the current average user score.