Let's start with the most important thing: yes, the woohoo in dumpsters in The Sims 4 Eco Lifestyle is real. Second, we do get a new way to kill sims. And third... ladders. Now we can move on.

I don't know about you guys, but I've been missing real challenges in Sims for a long time. Sometimes, when I run the sim family at maximum acceleration (with my finger firmly slammed into the three key) for four days in a row, I swear I'd pay in pure gold for a system of difficulty levels. So that one of these add-ons finally offers a bigger – and longer! – challenge. Increase likelihood of death, increase the needs, increase the rate of divorce, and make kinds extremely problematic. You know, the full experience. Make houses crumble (because how many arsons can a house sustain?), make them perish in a sea of lava! And where's the repo guy? I want him to take all my belongings!

Anything! I know mods can help, but come on – Sims aren’t cheap, and the price should go hand-in-hand with quality. It seems, though, that my feeble prayers were heard over at Electronic Arts, and that the upcoming Eco Lifestyle DLC will bring a ray of hope. It's gonna be okay.

Provided you don't hate trees and clean air, of course. End even if, it doesn't really matter. But I'm getting ahead of myself. 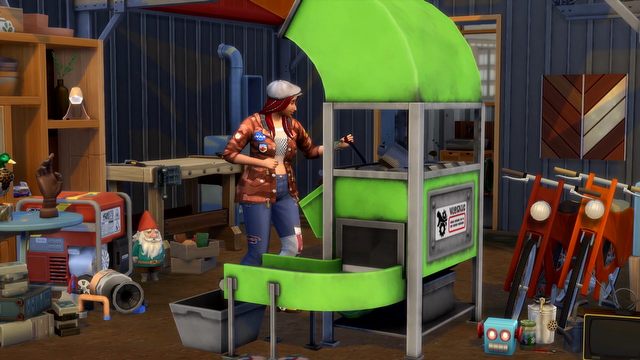 Cleaning equipment was never so easy.

Recently, I've been increasingly finding games that really resonate with me (that is, about 3 in 2 years). I like them a lot, and I fall into the cogs of the great machine of capitalism. Maybe I should have higher expectations. Or maybe – oh, terror! – my taste is rather ordinary. Or maybe I'm just a mass-produced unit in the hive of today's world, and it's easier for me to find the things I enjoy?

I pay attention to be more conscious about stuff that affects ecology, I try to live less-waste, and it's pretty easy. I try to avoid plastic within reason, my toothbrush is bamboo, and I cut animal-based products as much as I can. I self-educate and support simple environmental initiatives. I'm most definitely a prime representative of a girl in her late twenties, living in a large, western city. And there's one more thing. I dive dumpsters. 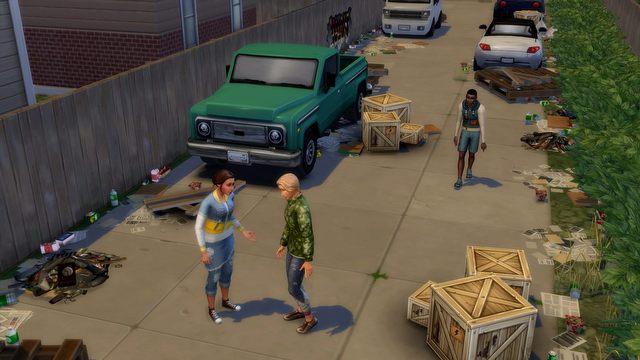 Looks bad, but imagine the potential!

I salvage stuff from the street. It's no easy stuff as I'm also a germophobe, but still, I furnished most of my flat with stuff I was able to get for free through a local facebook freegan group, and sometimes right off the street by curb shopping and garage sales. I salvaged pretty much the entire tableware, from fine, vintage plates, through cute coffee cups, to good wooden chairs and a table. I have stuff I collected in a few different countries, and each find is like a new, completely free, and absolutely unique loot box. I'm not disgusted at all. It's pretty much a hobby at this point.

So you can imagine that Eco Lifestyle, the dumpster-centric, eco-friendly DLC to one of my favorite games (20 years together, it's one of my longest relationships) has landed on fertile soil – I'm a model sim (it's an existential conclusion, finding of Heidegger's self). And I immediately have two conclusions: first, it's a prima-sort garbage truck simulator. Second, as I was discovering the novelties of this DLC, I couldn't help feeling that the creators were having a jolly good time figuring out all this stuff. And there's a lot of stuff. 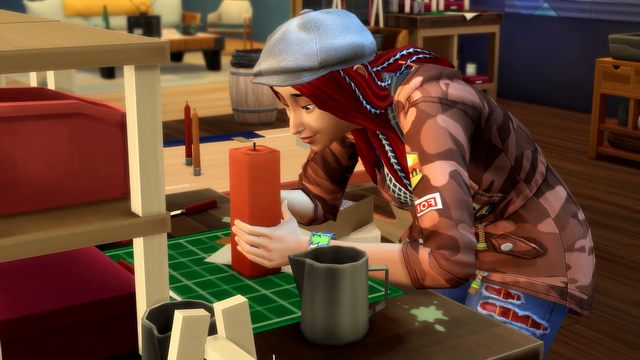 Some soy, dome dye from trash, and that's it!

One of the things you can do, for example, is introducing a sort of open-sexuality community. From sex in the dumpster, through growing meat in a pot – cruelty-free – to freeganism, a system of zero-emission houses, and machines that can be used without being plugged in. You can make soy candles, which – holy cow! – they burn out after a day. There are machines to process literally everything into parts needed to create different objects, and fuel to power the media. There are Sims with paper bags on their heads (I won't tell you what's that about), there are solar panels, windmills and soda factories. There are ladders that let you slide down, there's great industrial furniture, floors and wallpaper made of organic materials, absolutely beautiful woodwork and new apartment blocks. We can move windows and doors as we please. I could go on like that, and still wouldn't list all the novelties. You'll discover a lot more minor changes in the course of the game. Especially if you have other DLCs.

MY GREEN HEART BLEEDS (BUT ONLY A LITTLE)

There's been a lot of ecology in The Sims lately, have you noticed? We could clean the beach and take care of the environment in Island Living, or save money and curb spending in Tiny Living. In 2017, the community even voted for Eco Lifestyle as an accessory DLC – later renamed to The Sims 4 Laundry Day Stuff. Depending on your stance on these matters, you might be glad that EA doesn't use the DLC to advertise ecology as the company's official agenda, nor is it a kind of incentive. "I think we've always tried to at least throw in some informative facts here and there, but never really push too much of a message either way. What we try to do is give you the tools to play really the games you wanna play.” This is what Sim Guru George told me when I asked about this common denominator (and its educational aspect) of the latest DLCs. But of course, no one who treats PR seriously could say anything much different. The Sims are, after all, based on choices. Both ends of the spectrum (eco and smogo) have their up and down sides – there's no shaming of choices, and they're often ambiguous. And that works fine for me.