When I played Two Point Campus for the first time during the London show in May, I suspected that I would spend at least a few hundred hours in this game. Now I am sure of it. This game challenged me and I won't easily let it go. While I have always considered Two Point Hospital as an easy and pleasant strategy, absorbing players for hours on end with repetitive mechanical activities and scrolling of stats, the university version, after a nice and pleasant start lasting several hours, persistently mocked my skill. And it still does. I fell into the vortex of Two Point Campus headfirst and I am definitely not bored with the fight for that single star in the Spiffinmoore wizardry level, which will unlock my next university. This (literally) damn hard level is exactly what I needed in a game from Two Point Studios.

The problem is that I'm pretty sure it's a bug, not a feature.

If the necessity of earning money by the university causes you a moral dissonance, and you consider tuition and any fees for imparting knowledge (which should be free and freely available) a capitalist, classist aberration, I just want to say that I am with you, but if you want to enjoy Two Point Campus, you will have to put these beliefs aside. Or accept the fact that this is not a game for you. 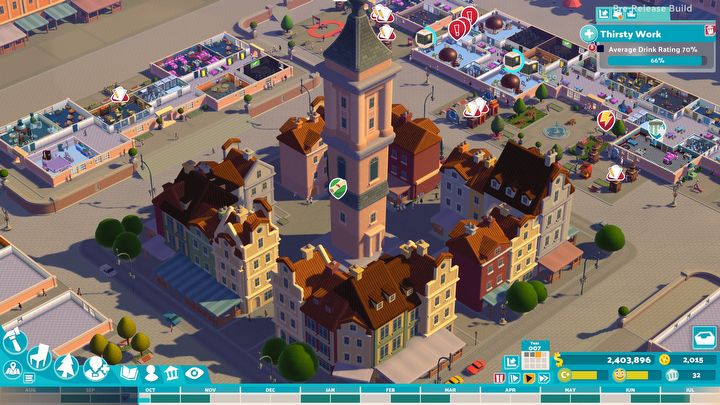 From the outset, the Campus was supposed to be different from the Hospital in a more individual approach. What does that mean? Instead of little "ants", which we treat or neglect to death in hospital, we get a whole lot of characters with their own preferences and internal states, with different ailments and limited endurance. We can choose our favorite students and look after them, take care of their needs, make sure they don't fail exams, watch them play cheeseball, fulfill their wishes, help them find a love interest and romance under a tree. We can, but we don't have to – if you prefer to focus on the bigger picture, you won't lose experience; the state of students will simply be another piece of data to keep an eye on.

Apart from the differences outlined above, Campus is simply the younger sibling of the hospital predecessor, and if you expect a revolution, you will be disappointed. That is, if it's even possible to be disappointed with even more Two Point games. When it comes to smaller but important changes, the furnishing is now more comfortable, and some elements of interiors can be customized. Besides – it's all roughly the old way.

The game gives us a huge world divided into smaller campuses-maps. Unheard of! So many universities in one place! They differ in the level of difficulty, but above all, in the setting – from a classic European university to a futuristic, state-of-the-art facility; from a gastronomic school to a sports academy. By discovering new levels, you will unlock access to new courses, in which you will be able to, for example, bake a huge pizza, become a knight or even a spy, focus on physical development, learn to cast spells, train robotics, archeology and art; you will also unlock new character archetypes (such as Jocks, Class Clowns), and with them, new equipment. Hallways full of goths among coffins turned into shelves? You've got it. 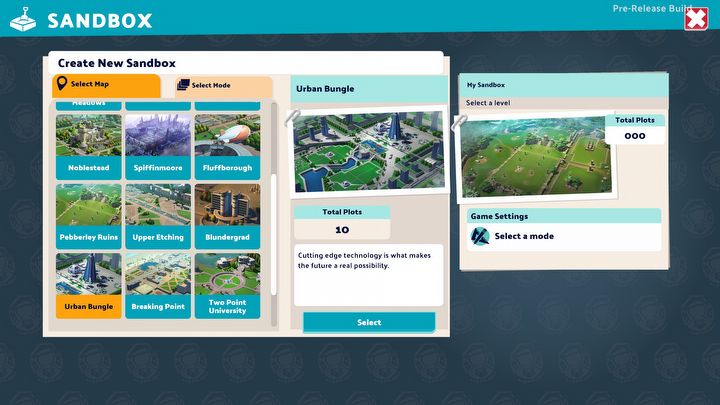 For Two Point veterans, the course of the gameplay itself will not be surprising. You build new facilities and prepare the rooms required for the development of the campus – lecture halls, social rooms, dorms, toilets, etc. You look after the welfare of students, their grades, as well as the budget; you control the income and expenses; levels of entertainment, and even character hydration or temperature on campus. You fulfill special purchase requests, equip rooms, organize events, clean, repair, train and upgrade. That's all to get the coveted three stars, or at least one, and unlock new maps, courses, achievements, trophies, and even more difficult gameplay.

The specific humor and signature atmosphere of the British studio's productions, eye-catching graphics – it's all here. Regardless of whether you want to focus primarily on individual students (it will become more and more challenging with time), or mainly on the development of infrastructure, the game will yield hours of quality fun, and you will not get bored for a long time.

The game will smoothly guide you from the tutorial to the more demanding levels – you won't get stuck on the way; the requirements that you have to meet in order to move the game forward and unlock the next maps are based on very clear guidelines. Just take your time. The learning curve is done really well here. Until you reach the “Harry Potter level”, you may doubt your skills and without enough persistence, you might abandon the game forever, cursing everything related to it and never, ever touch any tycoons, or anything else that's related to academia. The only exception here are bugs. Should that happen, you will smoothly move on to the next stage, and the relaxing routine of gameplay and furnishing rooms will keep engaged for days, weeks, so on, and so on.

As always, the strongest suit of this game is the overall, signature vibe. Witty and slightly cynical announcements from the speakers, a pleasant soundtrack that doesn't get boring, names of individual NPCs. After several dozen hours of gameplay, I can't get enough of it all! I'm beginning to suspect that my brain has developed an unconditional reaction, and now, when I hear this characteristic music, I immediately feel like building another student launge and sending janitors to clean the toilets. I know that once Campus is maxed out, I'll be waiting for the studio's next product, whatever it may be, even if it is still the same formula, only with a different theme. Put me on the waiting list right now. 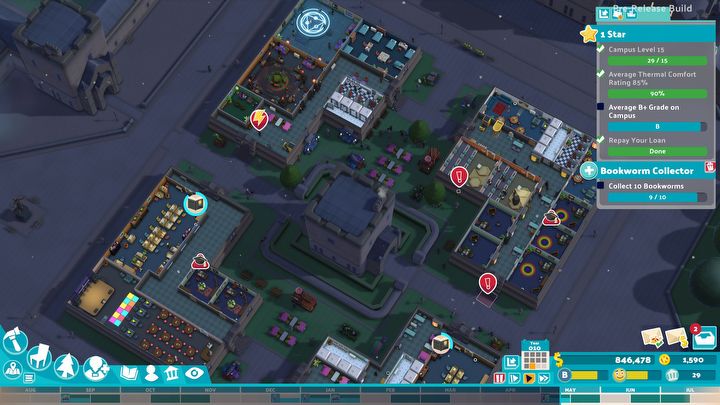 But there is also the other side of the coin. I lost a good few (key) hours of gameplay irretrievably, because the game simply refused to create a save. The fear of losing it again, when I have limited time to play, spoiled my fun for a long time. I forgot my problem when I got to Spiffinmoore, and after hours (and hours) of dealing with students, staff, and the effects of the curse on the building, I still couldn't get the one-star requirement I wanted – corresponding to the average grade of B+. Regardless of how many whims of the students I fulfilled, how many rooms for tutoring and pastoral help I constructed (which eventually led to bankruptcy); no matter how much I cleaned the dorms, corridors and lawns, the average grades of my students remained at constant C+, with temporary romances with B. On campus level 29 (required: 15) I decided to reset the game and start anew. As of writing this, I am at level 19, and yes, you guessed it, my students' grade average is still C+.

The hardcore difficulty level is a plus for me, I admit it honestly – it makes me want to play even more, because the prize, although still the same, begins to grow exponentially in my imagination. It has to be grand if getting it is so hellishly difficult! Only that after a dozen or so hours of this hopeless endeavor, I still don't know if it's even possible to get this reward; I also don't know if this hardcore difficulty level exists at all – if it is a bug, it will eventually be eliminated. 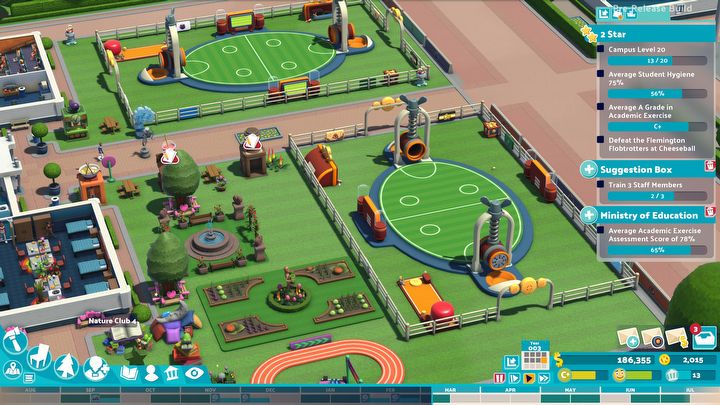 If you've had a good time in Two Point Hospital, Two Point Campus will not disappoint you. The specific humor and signature atmosphere of the British studio's productions, eye-catching graphics – it's all here. Regardless of whether you want to focus primarily on individual students (it will become more and more challenging with time, as there will be more of them later on), or mainly on the development of the infrastructure, the game will yield hours of quality fun, and you will not get bored of it for a long time. Well, unless the hospital installment wasn't all that exciting for you. This game likely won't change that.

I had a lot of fun. If the difficulty of Spiffinmoore is indeed a bug (and it probably is), all I can do is hope that somewhere at the end of the game I will have an equally difficult campus to play, but by design – so that it is possible to max it out. That's all I need to be happy.