Yes, this really is Steam. We log in on a mobile device and see our games, achievments, everything. The interface has of course been revamped to fit the needs of a handheld. There are two buttons around the frame that can be used to open two different menus, which makes navigation a lot easier. On top of that, the touch screen allows you to navigate the interface quickly and efficiently. The convenience is undeniable. These were my immediate impressions, but let's look into it more methodically.

How big is Steam Deck? 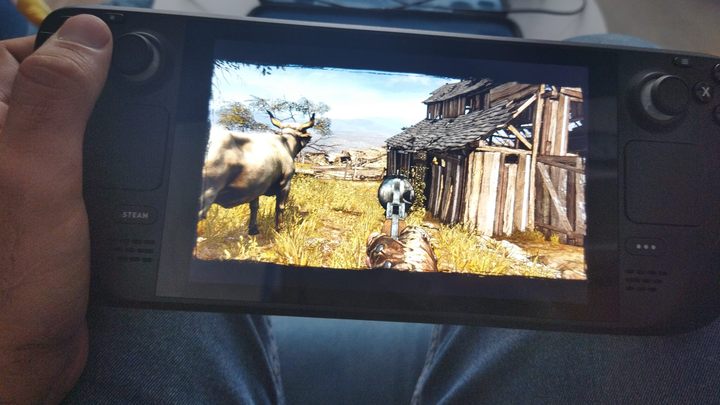 The Steam Deck is big, visibly bigger and bulkier than the Nintendo Switch. According to official data, it is almost 11.8" wide. By comparison, the Switch is about 9.4". You can feel the difference in your hands. In the zippered case, the Deck is the size of a notebook. It's rather hard for me to imagine travelling with it in anything other than a backpack or a briefcase; with some luck, it should fit a larger purse. It's also quite heavy, but not enough to bother me personally. However, I can imagine that for a 12 year old, holding this piece of hardware in their hands might be straining.

How does Steam Deck handle games?

The first couple of games I played were Frostpunk, Serial Cleaner, House Flipper, The Witcher and Call of Juarez Gunslinger. I also tried Besiege, as it's a small, yet demanding game, and also the first Commandos, as I wanted to see how the console handled older titles.

Gunslinger was the most dynamic game I tested. It may not be very demanding in terms of hardware, but here, any performance dips would be painful. However, Steam Deck handled it exceptionally, and I can have no complaints about the performance. The game was extremely enjoyable. It was the same with any other title I launched. It simply works.

Does Steam Deck heat up?

Yes; even with the games I tested, you could feel the central part of the back of the device getting warm. The hum of the cooling system was also audible, and the warm air coming out could help warm up cold winter hands. None of these elements, however, should significantly impact your experience. With the headphones on, you won't even be able to hear any sound coming from the device. However, it is worth noting.

How do controls work in Steam Deck?

This is an interesting question because the answer is: "it varies from game to game." In a shooter adapted to gamepads, I didn't experience any problems. House Flipper, where there is more item management than action, and The Witcher, where reflexes are more important than precision, felt quite convenient as well. It's exactly like playing on a console.

In Besiege, on the other hand, as with Frostpunk, it's clearly more difficult than with mouse and keyboard. You have to get used to the fact that controling the camera requires using the touchpads. These do not act like the analog knobs; they have their own tasks that they handle quite well, although it takes some getting used to. Also, their location is conducive to accidental touching, which, combined with that they're very sensitive, makes the camera jerk uncontrollably quite often if you're not careful.