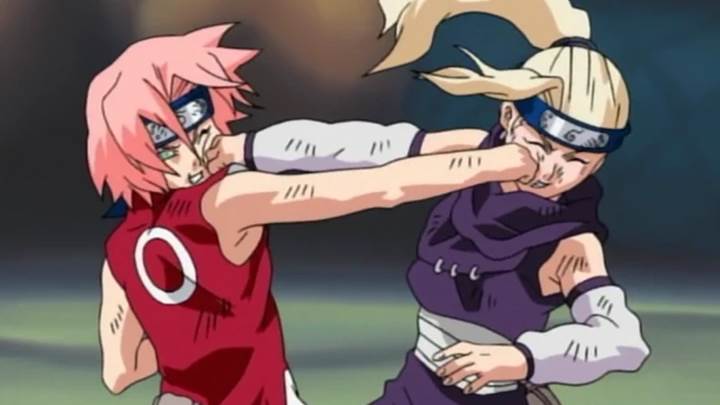 This is one of the fights which prove that you don't need a fight that devastates an entire region to build a high tension. The author of the manga was able to perfectly outline the personal foundations of both protagonists, as well as expand the themes of their shared experiences. And it's thanks to this that their fight, although not as spectacular, perfectly fits the vibe of the series.

Sakura was a very shy girl at the beginning. Her biggest complex for a long time was a high forehead, which she tried to cover with a fringe. This made her an easy target for bullies. At some point, however, she managed to gain a noble defender – Ino.

The brave kunoichi that rarely bit her tongue, was a similar counterweight to Sakura, as Sasuke was to Naruto. However, apart from friendship, they were connected by a completely opposite feeling towards the former. Ultimately, Sakura married Sasuke. Before that could happen, however, she had to mature and get into the shinobi duties. One of her most difficult experiences was fighting Ino. Both girls did their best, falling at the same moment. Ultimately, however, they remained friends.