In Naruto – unlike the slightly older Dragon Ball – fights do not end with destruction of planets and entire star systems, even in the great finale. Of course, there are magical attacks and transformations, and they are inherent in the world of Naruto. But despite the heroes packing a hell of a punch, they do not send their adversaries flying several hundred meters at the speed of sound. Perhaps that's why so many fights in Naruto remain so compelling even after so many years.

Today, we list the best fights from this animé series. The order does matter here, but it's not definitive or anything. Choosing which one should be on this list was quite difficult! It's a rather subjective matter, and each fan's list would look a bit different. Be sure to write about your favorite combat scenes in the comments! 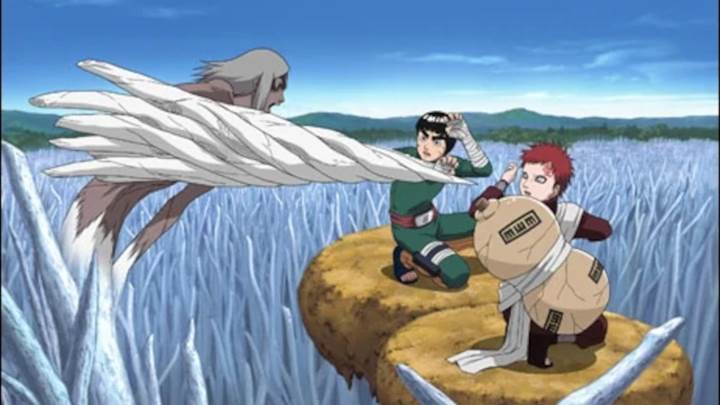 Rock Lee doesn't use ninjutsu nor genjutsu. Despite that, he was able to become one of the most powerful warriors of his time. That was mainly thanks to his mentor, Might Guy, who saw the potential in the boy. Thanks to this, he had the chance to become a shinobi.

However, he was thwarted by Gaara – a former villain, who, after getting to know Naruto, decided to abandon his hatred of the world and devote himself to defending his village. Meanwhile, however, he beats Rock Lee, breaking his arm and leg. According to the elders, this is to prevent him from becoming a shinobi. Despite this, the boy trains even in the hospital, and then persuades him to undergo the risky operation of Tsunade. At the time when he ventured into an unknown area with Naruto and Gaara, he's still undergoing rehabilitation. His hands are wrapped in bandages and by his side lies a bottle of medicine which turns out to be… well, booze.

Soon, Naruto disappears in pursuit of Sasuke, and Rock Lee drinks the contents of the bottle. However, he remains as incredibly fast as before, and additionally – completely unpredictable. It's a bit of a drunk version of... Ultra Instinct from Dragon Ball. Unfortunately, it's not even one hundredth of its power – Kimimaro counterattacks the boys' attacks relatively easily, and finally activates the second level of the seal, performing the final attack – Sawarabi no Mai, the Dance of the Seedling Fern. Luckily for Lee and Gaara, he dies of exhaustion one second before its completion.