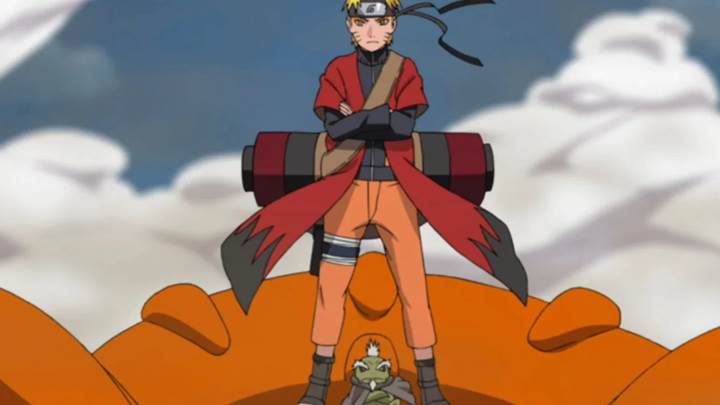 Naruto wasn't the strongest nor even the most talented apprentice from the start. A little clumsy and reckless, the hero couldn't find himself among his peers for a long time because of his connection with the mythical Kurama, aka Nine-Tails. The demon inside him rapidly healed the boy's wounds. His chakra, trying to break out, gave him strength. However, before the creature enchanted inside of him released the last tail from Naruto's body, he was able to learn to control it. Nevertheless, due to the devastation once done by the demon, the clan members held a grudge against him.

During his apprenticeship, Naruto overcame his barriers, gaining powerful allies, befriending his eternal rival, Sasuke, and saving his fellows from new threats. One of his strongest opponents was Pain, aka Nagato. In the Six Paths of Pain, he defeated Jiraya, losing only one body.

The scene in which Naruto stands above the sage frog is a true icon of the entire franchise. The fight itself also maintains the highest level in terms of aesthetics, perfectly balancing the dynamics, effective techniques and emotions. It's probably the latter that were crucial in the clash between Naruto and his team vs. Pain. Revenge is mixed with moral anxiety – after all, the villains are guided by quite noble ideals of ending all wars. In combat, however, Pain doesn't hesitate to use all means necessary to kill his opponents, as he did earlier during his encounter with Jiraya. After an exciting exchange of blows, he absorbs Naruto's Rasengan, using the Asura path immediately afterwards and almost tipping the scales of victory to his side. Ultimately, victory is secured with a combined attack of the main character, Itachi and B.