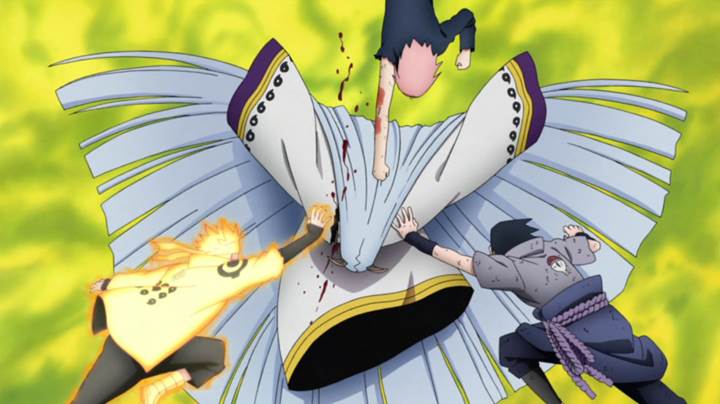 Kaguya is the main antagonist of the entire series. The mighty goddess, mother of Hagoromo and Haruma. She was once withdrawn and secretive, but with noble intentions. During many years of wars, even before the emergence of hidden villages, she tasted the fruit of the Divine Tree. Thanks to this, she gained tremendous powers. She was the first one on the entire planet to wield a chakra. However, this had an impact on her personality.

When she merged with the Divine Tree years later, the power of both of them appeared in the form of the Ten-Tails. The legendary monster was tamed by the sons of Kaguya. The goddess, however, managed to embody her own will, Black Zetsu, to return and fight the main characters. Convinced of her own omnipotence, the goddess didn't think that they would be able to oppose her.

This is one of the most effective fights in the entire series. The level of animation is spotless here – the creators aren't afraid to spill the blood of the heroes, allowing them to use spectacular jutsu and perform group attacks. It's all a pleasure to watch. The power of Kaguya and Team 7 doesn't seem exaggerated at all – the power of the former comes from eating the Divine Fruit, and the latter – from many years of arduous training. Well, I've done absolutely nothing to deserve fights like these.