The Nazis have been appearing in video games – mostly serving as cannon fodder sent against the player – ever since technology developed to such an extent that a bunch of pixels could resemble a Nazi (who was obviously far from photorealistic back then). After all, the memory of crimes committed in the name of National Socialism is still relatively fresh in people’s minds, and the very doctrine brings up unpleasant connotations. However, games often miss out authentic emblems, symbols, and flags associated with Nazism. Strict laws on the matter very often make players lose out on game realism. Should combating aggressive ideologies involve censoring their symbolism? 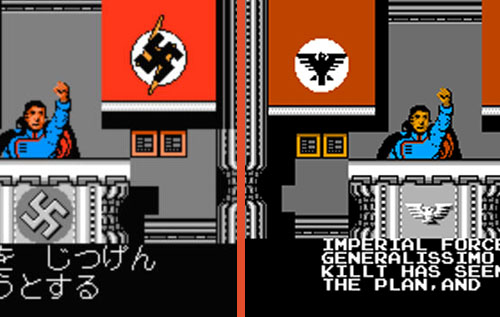 In the Land of the Rising Sun Bionic Commando was released as Hitler’s Revival: Top Secret. 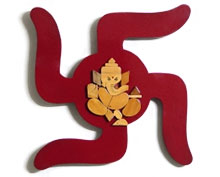 The swastika – a symbol generally associated with the Nazi Germany – does not have such pejorative connotations everywhere in the world as it has in Europe or America. If you visit Asia, especially its eastern parts, you may experience a culture shock seeing the symbol is still in common use. Obviously, it does not have anything to do with National Socialism – it stands for happiness, good-fortune, and balance. It is especially common in India and Japan, where it can be seen on many buildings. Before World War II it was also present on the Old Continent. The swastika was used e.g. in Finnish and Latvian aviation.

In order to establish the precise moment when the Nazis started to play a pivotal role in the world of electronic entertainment, we would have to comb through dozens of titles, many of which are now probably more than two decades old. Suffice to say that a cult coin-op game, Bionic Commando released in 1987, originally told about a group of National Socialists determined to resurrect the Fuhrer himself. The story was left untouched in Japan, however, the English version was significantly modified – the Nazis are all gone (although the main boss, Master-D, looks just like the leader of the Third Reich, with his characteristic hairstyle and moustache). Speaking of classics, of course Wolfenstein 3D from 1992, the father of FPS genre, used similar symbols. Actually, even such an innocent title as The Legend of Zelda was accused of containing references to Nazism, after players noticed one of in-game locations has shape similar to the swastika. The developers easily refuted the allegation, since the level was not designed to resemble Hakenkreuz, but the Buddhist Manja, a symbol of balance and harmony. 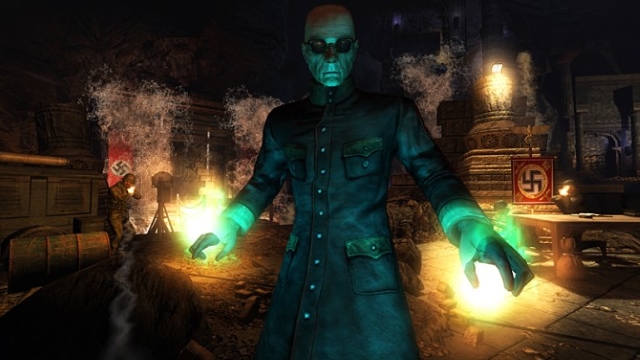 Players all over the world cannot imagine Wolfenstein series without Nazi symbolism. Players from Germany don’t have to.

In the New Millennium, FPS games set in World War II gained overwhelming popularity. First, players fell in love with Medal of Honor, which was later deposed by Call of Duty. In both series we fought against the Germans, so they obviously did contain Nazi symbols. Soon, however, these started to disappear. Take Medal of Honor: Airborne for example, where finding a building marked with the swastika was a real challenge. Of course, there were still some exceptions, whose creators made it a point of honor to include symbols of the Third Reich – one of the most recent examples is Wolfenstein: The New Order – however, the remaining tendency has been to avoid showing off elements that directly refer to the ideology of National Socialism. All because of a certain law in German Criminal Code.