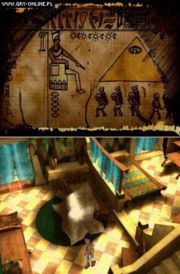 Cairo... the ancient city of thousand shapes, colors and smells. And of Pharaohs, crocodiles and assassins. It won't be easy for Assil to get an audience at the palace to get rid of his death curse. Even worse, the number of his foes is growing faster than his curse takes posession of him. And that's already quite fast. Only a keen mind can save Assil from certain death: You!

During his quest, Assil meets a whole bunch of weird people, from happy slaves to frightened crocodiles and finally Osiris himself, the god of the underworld.

* Based on the original Ankh from Artex Software (1998)

* More than 100 items you can use and combine

* Dozens of locations in and around ancient Cairo

* What else is there to say? Ankh is simply fun!

Aztec: The Curse in the Heart of the City of Gold