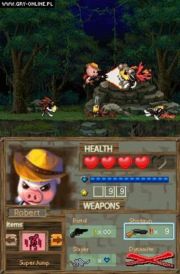 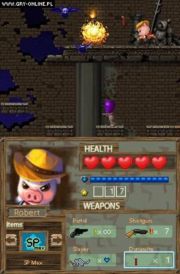 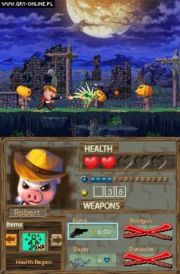 What is Barnyard Blast?

Barnyard Blast is an upcoming 2D action shooting game for the Nintendo DS. It is a parodic tribute to famous old-school horror titles. In Barnyard Blast, you control Robert Belmart, the Swine of the Night. Through 6 levels, you kill zombies, exterminate monsters, slash ghouls, and more.

When will it be released?

Barnyard Blast will be published in Europe by Bigben Interactive.

It will be published in America by DSI Games.

Barnyard Blast is developed by Sanuk Software, a game development studio based in Bangkok, Thailand.

What is the storyline?

One Halloween night, young piglet Cliffy Belmart is caught tee-peeing an ancient castle ruled by darkness, and swept inside by horrendous creatures. Instantly aware of the peril, his father Robert Belmart equips with a fully loaded gun and rushes into 6 different worlds with tough monsters and bosses. Is Robert a bad enough dude to rescue his son?

What are the game features?

A long journey into 6 stages: a night walk in the graveyard, the ancient castle ruled by darkness, the volcano BBQ, the old creepy wooden jail, the forest in the way, and the castle of intolerable pain.

A collection of weapons, items and upgrades.