Charlie and the Chocolate Factory (GBA)

Charlie and the Chocolate Factory is an action adventure game based on a cinematic screening (directed by Tim Burton and with John Depp in the lead role) of Roald Dahl's classic book of the same title. 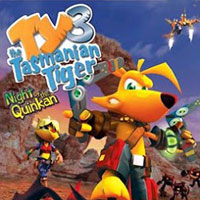 Ty the Tasmanian Tiger 3: Night of the Quinkan (GBA)

The next, third installment of a series of three-dimensional platform-arcade games with a nice tasman tiger in the lead role. The title Ty ends up in his hometown of Burramudgee plunged into chaos by the Quinkans - creatures that he defeated not so long ago.

Dynamic arcade game, in which we take control over the title rodent. We try to make Tom's male cat's life unpleasant by preparing various traps.

Another game from THQ's series, in which the player sits behind the wheel of one of the Hot Wheels cars. As the title indicates, it is mainly based on performing crazy acrobatics.

Xevious is a classic shooter, which in 1982 was prepared for the popular platforms of the time. Twenty-five years after the release of this item, it was decided to refresh it.