Party game for Nintendo's portable console, which is a copy of its 'bigger sister in faith' on GameCube - Super Smash Bros Meele.

The third part of one of the best GBA platformers is also the best representative of the series. Subsequent adventures of the supersonic hedgehog are also among the best positions in GBA history.

Power Rangers: Space Patrol Delta is a simple arcade game designed for not too picky players. All the time we run to the right and defeat other enemies, using only one of the attack variants contained here. Fighting is a very important element of fun - if we don't beat a certain number of enemies, we don't have anything to think about going to the next level.

Final Fight One is, as the title suggests, the first installment of the famous cycle of so-called walking brawls, initiated on coin-op machines at the end of the 1980s. The remake is designed exclusively for the pocket-sized Game Boy Advance console.

Final Fantasy V Advance is the next installment of the cult saga of Japanese cRPG games. In line with Square Enix's policy in this case too, it was decided to convert the 1992 hit into a portable Nintendo console - GBA.

Final Fantasy VI Advance is the third, after FFIV and FFV, remake of the classic title from the Japanese cRPG series for the Nintendo GBA console. The conversion of the game, which was distributed in three million copies all over the world, was done by the reliable Square Enix studio.

Continuation of the famous arcade role-playing game. The game continues to focus on mass elimination of creatures. This time, however, we can choose between eight characters (e.g. ninja, dark magician, or warrior).

The Sims: Bustin' Out (GBA)

The third part of the famous racer. This time we have the opportunity to test almost 100 new cars. Most of them are visually attractive conceptual models. A more complex driving model has also been taken care of. 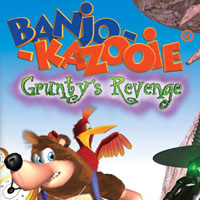 Platform game in which players can once again follow the fate of the title duo of heroes known from the game Banjo-Kazooie released on the Nintendo 64 console. In Banjo-Kazoo: Grunty's Revenge we're going through vast levels, fighting enemies, completing quests and taking part in mini-games; in this way Banjo gradually approaches the castle inhabited by the ominous Gruntilda to face it once again.

Harvest Moon: More Friends of Mineral Town is another game that takes us to the world known from several other consoles. This is a title rather for the beautiful sex, unlike the previous GBA, where the main character was a man. This time it is the women who can play the role of the farm's hostess.

The third part of one of the best series of platform games on GBA. Again we get a platformer enriched with elements of the shooter. Traditionally, we cross large levels and fight battles with enemies. The advantage of this title is a very high level of difficulty and beautiful two-dimensional graphics.

Pocket version of the cult PeCet shooter. We have a dozen or so extended levels to overcome. The action is observed, of course, from the perspective of the first person.

Classic adventures of Sonic and his friends, this time on GameBoy Advance. The game is very much reminiscent of its predecessors, also when the quality of graphics is taken into account.

Continuation of the adventures of the crazy hedgehog. This time we can direct one of the five different characters. Improvements included the appearance and size of the levels, as well as the quality of the audiovisual luminaire.

The Legend of Spyro: The Eternal Night (GBA)

Disney's Meet the Robinsons is an action game with adventure elements, based on computer animation (Polish title: Robinson's Family). The story is about a genius boy named Wilbur, who constructs a device to restore lost memories. It turns out, however, that this machine allows for unlimited travel in time.

An uncomplicated action game that belongs to the genre of "rifle scopes". We play the role of a police sniper and eliminate the opponents appearing on the screen.

Princess Natasha: Student, Secret Agent, Princess is a platformer with elements of the action game, prepared for the youngest users. The developers have based the plot of this item on an animated TV series about the crazy fate of Princess Natasha.

Deal or No Deal (GBA)