Heliborne published on PC is a multiplayer military action game that combines elements of popular online shooters and arcade helicopter simulators. The title is a debut project by JetCat Games studio. The production was largely financed by Practica Seed Capital KUB company, co-financed by the European Regional Development Fund.

Mechanics in Heliborne draw on popular MMO titles, like World of Tanks and World of Warplanes, but here, players get to control helicopters. The game features dozens of helicopter models produced by different countries during a few decades of the last century. Each machine is of course designed on the basis of its real counterpart and faithfully renders such elements as its looks, technical parameters, and original war paints of its military forces.

Gameplay boils down to a team competition for up to 16 players fighting on maps imitating the most important places of recent military conflicts, like Vietnam and Afghanistan. The production combines tactic and simulation elements and requires both strategic planning of actions and skilful manoeuvring of a helicopter, taking into account advanced flight mechanics, various properties of each machine, and different external factors (e.g. terrain, weather). Similarly to other productions of this genre, the game utilises an advanced development system and in progress, players can customise their helicopters looks and parameters, and implement upgrades useful in battles.

Heliborne lets you play in a few different game modes that, for the most part, serve as adaptations of popular multiplayer modes, like King of the Hills in which you attack and defend key points on the map. As for a typical multiplayer game, Heliborne supports clans and e-sport competition between particular fractions.

Released on PC, Heliborne features impressive graphics which balances the quality of 3D machines and environment visuals and smooth gameplay, which is extremely important in multiplayer competition. 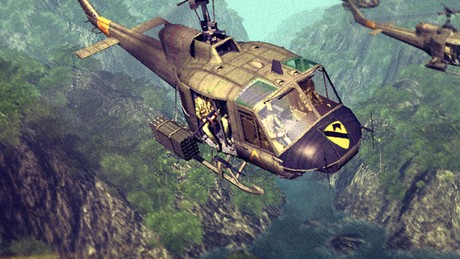 Weve had tanks, warplanes, and warships, so its high time for helicopters. Heliborne is a multiplayer game by JetCatGames allowing you to fight 8v8 battles in helis, with an emphasis on cooperation and capturing territory.