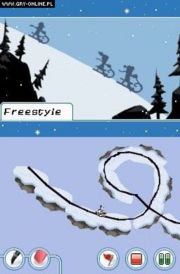 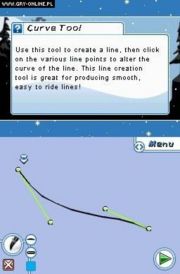 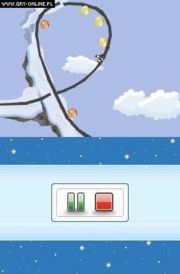 Line Rider is a commercial version of a simple Flash game created by Bostjan Cadez. It is very difficult to say which genre this product belongs to because even the author describes his work as more of a "toy" than a game. The game was developed by inXile Entertainment known from, e.g. The Bard's Tale series.

The original Line Rider, released in 2006, uses a pencil to draw a line on which a fearless tobogganist will try to descend. We have no time limits or a certain number of lives. We can create any track we can imagine. Our goal, however, is to design the road in such a way that our character is able to reach the finish line.

The creators of the continuation, however, were aware of the fact that the new Line Rider must have something more to sell well. For this reason, we have can play in several game modes. Some of them are known from the Freestyle prototype, but the game also has a new one - Story Mode. In this mode, we take control of one of the 3 heroes (Bosh, Chaz or Bailey) and we have to do about 40 tasks. In each of the stages, we have to use limited tools to lead one of these daredevils to a specific point on the map. The greatest fun, however, is provided by Creation Mode, where we can give vent to our fantasy. Here the game resembles Little Big Planet because we create both the track and the tasks to be performed on it. We can share the results of our work with other players via the Internet, which means that we will never complain about a small number of levels.

The Wiimote or stylus interface could cause some problems due to shaking hands, so we've introduced familiar graphics software tools to correct the lines we've drawn. The PC and Wii versions are practically no different. The NDS port is slightly poorer (no clip-art, some graphics effects and additional drawing options created by players), but the main elements of the game are the same on all three platforms.