The Chronicles of Riddick: Assault on Dark Athena

Riddick Chronicles: Assault on Dark Athena is a Swedish Starbreeze AB action game set in a dark, futuristic universe known from Pitch Black and Riddick Chronicles. As the title character, the player has to face the ruthless crew of the Dark Athena spacecraft. The game combines elements of first person shootout and sneaking. 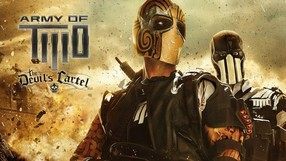 Army of Two: The Devil’s Cartel

The third instalment of Army of Two from 2008. The title puts the player in the middle of a drug war taking place in Mexican cities. Just like its previous parts, the game focuses on cooperation.

Humorous RPG game created by Double Fine studio team known from Psychonauts and Brutal Legend. The action of the title takes place on Halloween night, when during a traditional game, a monster with a weakness for sweets kidnaps a little girl - the main character's sister. Desperate boy sets out to rescue his little sister, being able to count on the support of up to four companions with different skills.

Alone in the Dark: Inferno