An official DLC that expands the plot of the 2010s BioShock 2 by 2K Games. The action of the expansion takes place at the same time as the events of the original. In Minervas Den, we assume the role of a completely new character, who joined forces with the originals Brigid Tenenbaum, and visit previously unknown locations in the underwater city of Rapture, uncovering mysteries of its new governor and filling up some missing pieces of the plot of BioShock 2.

Dynamic action game developed by Activision, an adaptation of the 2007 American superproduction. The PC version was created by Traveller's Tales, while the console and handheld editions were made by Vicarious Visions. The plot of Transformers: The Game is loosely based on the story told in the film. In the game we can control both Autobots (Optimus Prime, Ironhide and Bumblebee are at our disposal) and Decepticons (in this case we play as Megatron, Barricade or even Starscream).

An action game released by Namco Bandai that allows you to explore the world of witch hunting. The creators combined arcade elements in the form of a dynamic system of fighting with light aspects of adventure in the form of occasional puzzles. The main character is immortal and the difficulty of the game results from the need to protect his mortal companion.

Bladestorm: Hundred Years' War is a strategy game created by the fathers of the series Dynasty Warriors, Kessen and Samurai Warriors. However, unlike these popular brands, developers have placed the action of their new work not in Asian reality, but in medieval Europe. 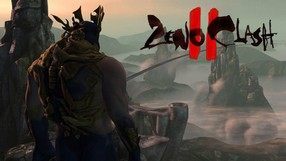 Sequel engine based Source game entitled Zeno Clash. For the second time we have the opportunity to direct the actions of the warrior Ghat, who travels through the abstract land of fantasy filled with monsters.

Star Ocean: The Last Hope International is a version released exclusively for PlayStation 3 edition of jRPG Star Ocean: The Last Hope, for which the tri-Ace development studio will be responsible. The story depicts the fate of two young heroes who, after the outbreak of the Third World War and the destruction of the Earth, are looking for a new place for people to live in the Universe.

Unusual action game in which we travel around the uniquely designed world in the form of a crazy earthworm named Jim.

Conflict: Denied Ops is a FPS game developed by Pivotal Games - a bastion of Conflict series creators (Desert Storm, Vietnam etc.). The game is about the adventures of two brave agents working for the American Central Intelligence Agency.

Hail to the Chimp

Hail to the Chimp is a game created by Wideload Games development studio (responsible for Stubbs the Zombie) and released by Gamecock Media. This item can be described as a skillful, zoological-political, satirical party game. This time this term does not refer only to the title created for events, consisting of many interesting competitors, because the word "party" has a double meaning here - in English it also means a political party.

Ice Age: Dawn of the Dinosaurs

Warhawk is an action game for PlayStation 3. This product is also a remake of a former hit from the first generation PlayStation, released in the mid-1990s.