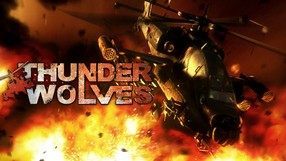 Three-dimensional skillfulness that allows us to take on the role of a pilot of a military helicopter. We carry out a wide variety of missions to fire and destroy enemy units and buildings, escort convoys, and to defend specific positions on the battlefield.

Blood Knights is an action-RPG developed by Deck13 studio. The game tells the story of vampires and vampire hunters, whose souls have been joined by a spell. The game consists mainly of fighting hordes of enemies, gathering loot and developing heroes. The authors put great emphasis on the cooperation mode.

A fast action game based on a popular Japanese comic from the 80's set in a postapocalyptic world. As in the first part published in 2010, players take on the role of a master of martial arts named Kenshiro and fight simultaneously with dozens of opponents, using the most imaginative brutal techniques and movements.

A walking brawl based on the screenplay of a film under the same title. There are three characters to choose from: Kick-Ass, Hit Girl and Big Daddy. None of them has any superhuman powers, but all of them try to be superheroes. They pursue this ambition by clearing the city of bandits and criminal organisations.

Hyperdimension Neptune is an RPG game, which refers to the war taking place on the console market between Sony, Microsoft and Nintendo.

Under Siege is a fantasy real-time strategy (RTS), for which the Seed Studios development team is responsible. Players get to know the history of Eiric, Kari and Asgeira, traversing a fantastic world modelled on the Middle Ages. The developers prepared several variants of the game and implemented support for the PlayStation Move controller.

Time Crisis: Razing Storm is an arcade shooting game based on the title known from the salons with slot machines. Developed by Namco Bandai for the capabilities of the PlayStation Move wireless controller. Players play the role of members of an anti-terrorist unit, which is sent to South America with the task of liquidating the heads of a dangerous terrorist organisation. The game combines elements of a first-person action game and the so-called "target sight".

SingStar Dance is a game from the music and dance series produced by Sony Computer Entertainment. Players have the opportunity to test their skills by singing popular songs (karaoke), as well as try their hand at dancing. The game takes advantage of the capabilities of the PlayStation Move controller and the PlayStation Eye webcam, offering fun for up to 4 participants.

Bomberman Ultra is another part of the popular series, dating back to the 1980s. The game is aimed at all those who like fast pace and competition.

A futuristic real-time strategy in which we protect the base from hordes of hostile creatures. In order to achieve this, we set up and improve various defensive mechanisms.

A DLC for Dragon Age II, the second installment of the popular fantasy RPG series by the experienced studio BioWare. Dragon Age II: Legacy is a new adventure that can be started at any moment during the main campaign. It starts with an attack of a dwarven Cartel that hunts the Hawke family for an unknown reason.

The Surfer is a sports game by the Bungarra Software development team. Players have the opportunity to test their skills in wave surfing. The gameplay is characterized by a highly dexterity model of physics, which allows you to perform spectacular stunts on a board. The creators envisaged several modes of fun, including the "Hardcore Tour" designed for enthusiasts of this sport.