Samurai Warriors 4 is the next part of the TPP action game series dedicated to samurai, in which we play the role of authentic characters, taking part in historical events from the history of Japan. In the fourth installment of the cycle, the number of playable warriors was increased and the possibility of creating one's own protagonist was added. In addition, we can now take two heroes to the battlefield and switch between them while having fun. 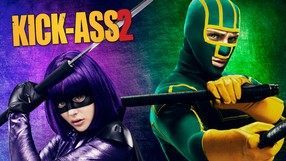 Maintained in the convention of "walking brawl". (brawler) action game, being an adaptation of the film under the same title. Kick-Ass 2 is the work of Freedom Factory studio, whose output also includes such productions as Cycling Evolution 2009 and BloodBath. The game's plot is based on the cinematic original. The main characters, two high school students in superhero costumes - Kick-Ass and Hit Girl - must clean the city from criminals led by the dangerous The Motherfu**er.

The House of the Dead III

The next installment of the famous arcade shoot'em up series, created mainly for gaming lovers of this unique genre.

Talisman is a virtual version of the famous feature board game, the first edition of which was published by Games Workshop in 1983. In Poland, the original is known as Magic and Sword. The participants of the game move to a fantastic world and play the role of heroes trying to find the legendary Crown of Power.

Superstars V8 Racing is a licensed car race produced by Milestone, a gaming company specializing in this genre. The title was created for motoring fans who prefer a skillful driving model. Players have the opportunity to sit behind the wheel of sports cars of well-known brands and take part in the Superstars V8 series.

Second extension of the DLC to the third part of Fallout. This time the player can go to post-nuclear Pittsburgh, controlled by slave hunters. This plugin offers previously unknown weapons, armor, items, achievements and percussion. The whole thing is enough for about 2-3 hours of fun.

A puzzle game for the whole family. Challenges require not only cleverness, but also dexterity. At the same time it is a production that focuses on the creativity of players. With the help of several tools (brushes, textures, stickers) participants can create their own worlds and solve problems in various ways.

Another issue of the simulator of the series of races popular especially in the United States. This is the first NASCAR game in many years, for which Electronic Arts is not responsible.

Combination of logical game and cRPG. We travel through a fairy-tale land, fighting numerous duels, developing the skills of the main character, collecting items of equipment and completing simple quests.

The cRPG title, for which Polish programmers from Nicolas Games Intoxicate studio are responsible. This position in the pre-production phase was known as the Bourgeoisie and takes full advantage of the a la Fallout climates.