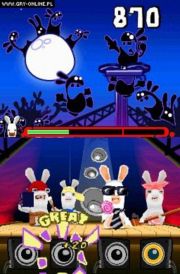 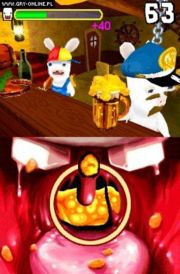 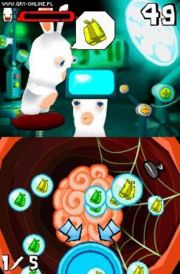 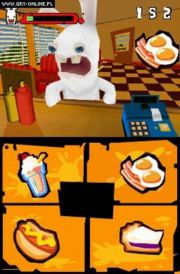 After invading the world of Rayman, the insane Rabbids have a new objective: THE INVASION OF PLANET EARTH! Setting their home base at a shopping mall, the Rabbids try to study human behavior and mimic everything humans do in funny, illogical ways. As part of their training, the Rabbids must carry out several missions around the globe to prepare themselves for world domination. Rayman will attempt to infiltrate the Rabbids, disguised as one of them, in a mission to foil their crazy plans and save Earth. Game features include:

* New wacky games - 60 brand-new games that spoof popular culture and are even wackier than those featured in the first Rayman Raving Rabbids.

* Unique use of the Wii Remote  Discover new, innovative ways to play, with eight types of gameplay, including shaking, precision, dexterity and balance.

* Travel around the world - Take Rayman on a world tour to defend Earth from the Rabbids invasion. Travel to five different regions such as the USA, Europe and Asia, where players will challenge the Rabbids in the local environments.

* Customize Rayman and the Rabbids - Use more than 110 items (skins, hats, accessories and clothes) to dress Rayman and create your own Rabbids. Unleash your creativity with over 540K customization combinations.

* Multiplayer experience  Play co-op or battle up to three friends in all the games unlocked in the single-player campaign.