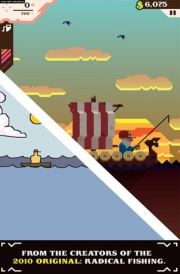 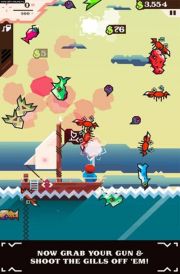 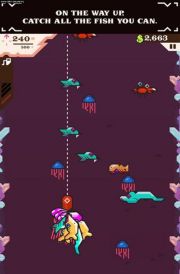 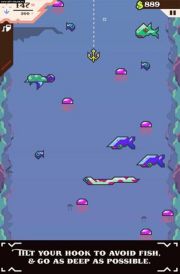 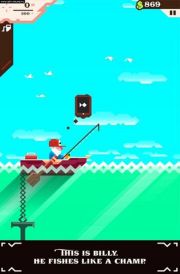 Ridiculous Fishing, released on iOS and AND, is an unusual 2D arcade game produced by Vlambeer, known from the popular mobile production Super Crate Box. In addition, the developers also created Serious Sam: The Random Encounter for Ps as well as several other smaller titles.

Ridiculous Fishing tells the story of an angler Billy, whose great passion is, of course, fishing. However, the older man doesn't care about regular fishing. While playing, we cast the lure, trying to avoid underwater sea creatures, so that it drops as low as possible. Then, the hero starts to reel the line, catching every fish on the way, and finally throws them over the surface of the water. This is not the end, however, because Billy pulls out a firearm and starts shooting at the fish. The game consists in the efficient performance of these activities, which in turn fills the angler's wallet with dollars (the more rare specimens, the bigger the payout), allowing you to buy improvements, such as more effective weapons or... mechanical saw mounted on the lure.

The developers worked on the game for over two years, and the production was assisted by Zach Gage (Spelltower, Bit Pilot, Unify) and Greg Wohlwend, known from Hundreds, Solipskier and Gasketball.