The Uncertain: Light at the End

The Uncertain: Light At The End is a continuation of an adventure game in which machines turned against people, where by playing the role of one of the few survivors we try to understand what caused it. 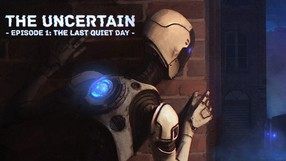 An episodic exploration adventure game, created by an independent studio ComonGames. The plot takes place in a post-apocalyptic world in which humanity, as a result of multiple, prolonged wars, has become completely extinct. Earth is now a home to simple life forms and AI-controlled robots. In a series of episodes, we assume the role of various machines, the main task of which is to discover the human nature and reasons for the fall of a whole civilization. The action in The Uncertain is seen from a first-person perspective, while the gameplay involves exploring diverse environments, acquiring information from leftover notes and journals, and finally, solving various riddles. The latter focus on manipulating various items and elements of the environment, often forcing the player to think unconventionally. High-quality visuals are achieved thanks to the Unity engine, with atmospheric, ambient soundtrack complementing the visual side.