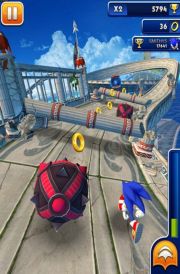 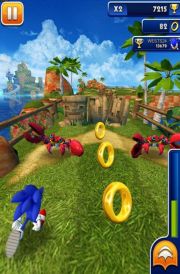 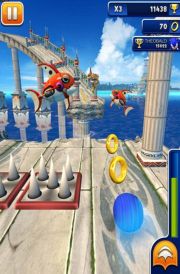 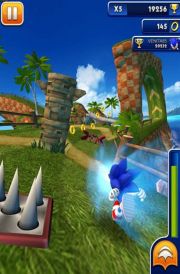 Sonic Dash is a third-person endless runner based on the same rules as the popular Temple Run. The hero of the game is one of the most popular video game characters - the titular hedgehog named Sonic. The game was developed by Hardlight studio belonging to the SEGA concern.

The structure of each stage was based on the Seaside Hill and Ocean Palace levels, derived from Sonic Heroes, released in 200. The gameplay is typical for this genre - the players' task is to run as long as possible, avoiding collision with walls, obstacles and various opponents.

We observe the action from the third-person perspective. Apart from Sonic - we can also play as his friends, such as Tails or Knuckles. During the game, we also collect special rings, which charge up the bonus bar. After filling it, we can take advantage of a special bonus, which allows our protagonist to run even faster and be invulnerable for a limited time.

The graphics in Sonic Dash are maintained in a colorful style, characteristic for all games with Sonic. The production is available in a free-to-play model. We can spend the in-game currency or real money on new characters, upgrades and various bonuses.