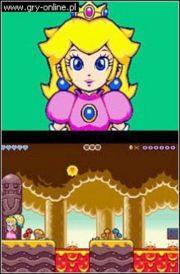 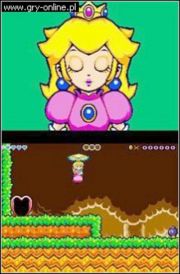 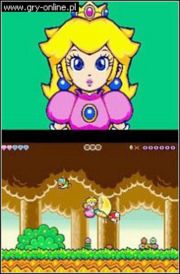 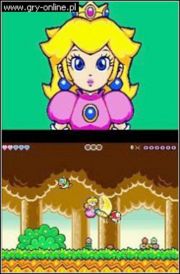 When Bowser kidnaps Mario and Luigi and gets hold of the magical Vibe Wand, he heads off for Vibe Island with a troop of minions in tow. Intent on rescuing the Mario Bros., Peach gives chase, only to find herself affected by the vibes given off by the island. Using these newfound vibes to channel special abilities, she sets off to rescue Mario and Luigi!

* Play as Princess Peach, out to rescue the Mario Bros! Whack Bowser's minions with your parasol!

* Peach channels vibes into special abilities. Float through the air when she's happy, burn through walls when shes mad, or make vegetation grow with her tears!

Super Princess Peach features classic Mario Bros. style side-scrolling action. Each world is composed of five levels and a boss. As you look for Mario you'll also find imprisoned Toads and collect coins. While you run and jump through levels, you must use Peach's vibes to break through impediments, scale impossibly high cliffs, and defeat enemies. To build up Peach's vibe powers, collect gems or pick up enemies with your magic parasol and absorb them.

- Joy: Peach whirls about like a cyclone, creating air currents that will spin windmills, clear away enemies, or even lift her high into the air.

- Gloom: Peach weeps and runs incredibly fast, during which time she's invincible. Her tears can cause plants to grow, among other things.