The Solus Project for PC, PS4 and XONE is a science-fiction survival sandbox. It was developed by Teotl, a Swedish studio that created a logic game entitled The Ball as well as Unmechanical, a puzzle-filled platformer production.

The story of The Solus Project is set the world of the aforementioned The Ball, although the action takes place in a distant future, when Earth is at the verge of an ecological disaster. The humanity desperately searches for new worlds to colonize, and we assume the role of a member of an exploration team. After twenty years of space journey, we reach our destination, but the landing ends with a crash as a result of which the entire crew, save for the protagonist, die. What is worse, most of the equipment is damaged, including the communication devices. Therefore, we are completely alone and entirely on our own.

Contrary to typical survival sandboxes, The Solus Project for PC, PS4 and XONE offers an extensive story. The planet hides numerous secrets, and it quickly turns out that we are not the first person to ever set foot on its surface. Our task is to establish communication and call for help.

The action is observed from the first-person perspective. The uncharted world has an atmosphere capable of sustaining human life as well as large fresh water reservoirs, but it is far from paradise. Most of its surface is covered with desert and rocks. During daytime, the temperature exceeds 40 degrees Celsius and then drops below minus 35 degrees at night. Survival is made difficult by regular thunderstorms, tornadoes, volcano eruptions, hurricanes, and sudden ebbs and flows at seas.

Exploration is important. We may find lots of mysterious structures on the planets surface and will spend much time on investigating vast caves. The game puts logic challenges in our way on a regular basis. They require a cunning environment manipulation to be beaten.

All of the above is presented within attractive graphics powered by Unreal Engine 4. The Solus Project supports Oculus Rift. Moreover, the game offers powerful modding tools that allow the fans to easily add new locations and quest to the game world. 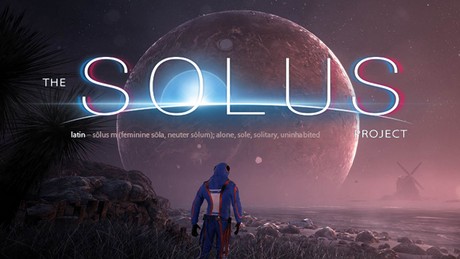 We review The Solus Project, an independent space adventure game aspiring to be a survival sandbox. Does the story taking place on planet Gliese-6143-C have a chance to conquer the universe?

Sci-fi FPP exploration/survival adventure game The Solus Project is coming out for PC on June 7, 2016. Xbox One edition will be available later the same month.