A first-person shooter set in World War II developed in cooperation by CI Games teams in Rzeszow and London. In the main campaign, the player assumes the role of Robert Hawkins, an American war correspondent, who joins the resistance movement as a witness to the cruelty of the Germans. The action takes place primarily in the war-torn Warsaw, although we will also visit Norway, France, and Germany in the protagonists flashbacks. The gameplay mechanics dont deviate from the genres standards and offer a dynamic action with numerous shooting sequences and a rich weapons arsenal. Enemy Front is powered by CryEngine 3, which was also used in Crysis 3 and Sniper: Ghost Warrior 2, among other titles. 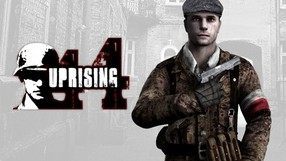 Uprising44 is a fact-driven action game with real-time strategy elements (RTS). Players take on the role of Home Army soldiers participating in the Warsaw Uprising. Developers from DMD Enterprise studio made a lot of efforts to illustrate the conditions in which the insurgents fought with the occupier.