Sonic Riders are arcade races featuring the title blue hedgehog and other heroes of the popular platformer series developed by Sega. The plot of the game focuses on the struggle for Emerald Chaos, the main prize in the tournament organized by the cunning Doctor Eggman. Guided by the character's actions, the player participates in spectacular races on jet boards, performing crazy stunts and fighting with rivals.

In alternative history, the Soviet Union wins the Cold War with the West and the Red Army invades the United States. The player becomes a member of the resistance movement fighting against the occupation forces.

Knights of the Temple II (XBOX)

Sequel was released in March 2004 as an action-adventure (hack-and-slash) game. Again, we play the role of Paul de Raque, a knight of the Templar Order, entangled in the eternal struggle against the demonic forces of Hell that attack humanity. The authors reduced the linearity of levels, added a trading option and RPG elements in the form of a character development system.

Not too complicated arcade game, referring to the famous science-fiction films. We play the role of one of the members of the resistance movement and fight against machines sent by Skynet.

Combat Elite: WWII Paratroopers is an action game from a third person's perspective, produced by the BattleBorne Entertainment development studio. This title was created on a Snowblind engine.

Action game with RPG elements in fantasy reality, played from TPP or FPP view. The world of the game has divided into the land of good and evil - we have to take one side. The campaign consists of more than 20 levels full of different monsters. Climatic locations and a rich arsenal diversify the gameplay.

Direct continuation of Ford Racing published in 1999. The distinguishing feature of this game, which is also a strong point of Ford Racing Evolution, is the official license and Ford's support for the use of selected models of the concern.

A sequel to a well-received FPS game developed by Volition. Red Faction II is set five years after the events depicted in the original game, when a civil war breaks out in the Commonwealth. The player assumes the role of Alias - an explosives expert belonging to a team of six super nanosoldiers. The protagonist joins a rebellion against Victor Sopot's totalitarian regime. In terms of mechanics, Red Faction II expands the patterns introduced in the first installment.

Total Club Manager 2005 is a direct successor to the good and internationally recognized Total Club Manager 2004. The newest version of TCM, sponsored by EA Sports, is a program made on a grand scale, with a significant number of new solutions compared to the previous year's version.

Pac-Man World Rally is another game with a nice yellow ball eater in the lead role, this time focused exclusively on arcade races.

Dynamic arcade game TPP, in which we play the role of the title ninja warrior, planning revenge on the members of an enemy clan. The player has a dozen or so different boards to overcome.

City of the Dead (XBOX)

City of the Dead is a first person shooter, whose names were lent by George A. Romero, the famous director of the horror/gore film series, who since 1968 has been successfully shooting further pictures about the struggle of people with zombies. 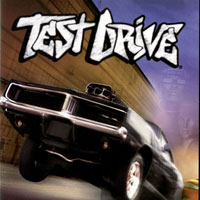 The next installment of the famous series of car races, which began in 1987. TD Overdrive is not a realistic simulation - it has an agility model. The races take place in four main cities and there is a choice of approx. 20 sports car models.

Shrek SuperSlam is an action game produced by Amaze Entertainmen developer studio with a third person perspective (TPP), set in a world well known from DreamWorks animated films. Players can play the title game or 20 other fairytale characters and take part in spectacular duels using fists, hooves, tusks and various other weapons.

Another part of the exciting street races coming from Rockstar Games. The best drivers meet every night in the streets of three giant metropolises - Los Angeles, Paris and Tokyo - to wade through the streets of the sleeping city at high speeds.

Dynamic action game, full of RPG elements and maintained in the convention of gothic dark fantasy. As is usually the case in such productions, we observe our protagonist from the perspective of a third person, with the possibility of active camera rotation.

In Wreckless we can ride in a crowded city without any rules. Our task is to fight the Japanese mafia - Yakuza - in 20 dynamic and diverse missions.

Continuation of the not too complicated action game. We play one of the five possible characters and set off to fight hordes of hostile creatures. The game includes an extensive multiplayer, players can also play in cooperation mode.

"Blinx 2: Masters of Time and Space" is a classic three-dimensional platform game genre. This title was created in Artoon's studios, also responsible for the first part with the subtitle "The Time Sweeper". Microsoft is the publisher of both of these items.