A fun racing game in which we sit behind the wheel of a truck and transport goods. During the execution of subsequent orders we compete with other drivers. The creators of the production focused on a skillful driving model and a humorous audiovisual setting. Travelling is enhanced by typical truck music in country climates. 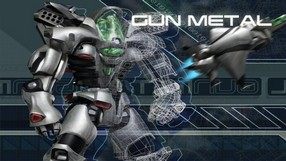 A dynamic action game originally developed for Xbox and then ported to PC. Gun Metal takes players to a distant future in which humanity moved to the planet of Helios after they had been expelled from Earth by aliens. After a long time of peace, another alien attack puts the mankinds existence in danger. The only hope of salvation seems to be the technologically advanced Havoc Suit that is capable of transforming itself from a powerful mech into a jet fighter.

The Lord of the Rings: The Two Towers (XBOX)

"Darkwatch : Curse Of The West" is an action game genre shown from a first person perspective (FPP). The action of this position was placed in the scenery of the Wild West, terribly popular recently among game creators. This position is being created in the buildings of Sammy Studios company, which has, among others, a series of "Guilty Gear" battles.

Full Spectrum Warrior: This Hammers is a continuation of the famous tactical action game created by the team responsible for Star Wars: Battlefront and Battlezone. Again, we control a well-trained unit of brave American soldiers, armed with authentic weapons and behaving extremely realistically.

Pro Beach Soccer is a sports game produced by Pam Development studio in cooperation with Beach Soccer Worldwide. Players have the opportunity to try their hand at beach football. Tournaments are played on sandy pitches in Rio, Marseille, Bangkok and Venice. The creators have provided several difficulty level settings that allow you to choose between an arcade or a more realistic style of play.

Another console installment of the series of World War II first-person shooters developed by Electronic Arts. After a short trip to the Pacific this time the series goes back to European countries. The player assumes the role of Lieutenant William Holt, a commander who, together with his new squad, is selected to complete many secret special missions. He and his team can impact the outcome of four great battles that took place in France, North Africa, Stalingrad and in Ardennes.

Return to the sources or remake of the classic arcade game with Ferrari wagons in the main role. Try your hand at dynamic and daring races, and when you've reached a high level, invite your friends to play.

A hack-and-slash action RPG and a console spin-off to Fallout, the popular series by Interplay. The action of Fallout: Brotherhood of Steel is set between the first and the second installment in the series, and the players task is to serve in the eponymous Brotherhood of Steel as it tries to contain the chaos spreading throughout the post-apocalyptic wastelands.

Reservoir Dogs is an action game based on a loud movie under the same title (the Polish name is Wratisy Dogs). This cinematographic work was directed in 1992 by the famous Quentin Tarantino and featured Michael Madsen, Steve Buscemi and Harvey Keitel.

A third installment in a popular series of console racing games, originally launched in 2001 by the British studio Criterion. Burnout 3: Takedown is the biggest game in the series, sporting an impressive set of more than 70 cars, divided into 12 categories, and 40 varied racing tracks on three continents. The list of game modes was also updated, with an overall of 9 single-player modes and 7 multiplayer ones, in which up to 16 players can take part.

Conflict: Global Storm is the fourth part of the popular series, the previous editions of which dealt with the war in the Gulf region (the first two episodes) and the military intervention of the United States in Vietnam from 1966-1969. This time we find ourselves on the battlefield from the beginning of the 21st century, and the heroes known from Conflict: Desert Storm and Conflict: Desert Storm II - Back to Baghdad enter the battlefield again.

An official expansion pack for Doom 3. It was developed by Nerve Software, under the auspices of the base game's creators. Resurrection of Evil continues the storyline established in the core game, once again taking the player to the secret research facility on Mars. It turns out that defeating the powerful Cyberdemon and destroying the portal leading to hell were not the only problems of the Union Aerospace Corporation.

Action game based directly on a sensational series under the same title (in Poland - "Policemen from Miami"). The action of the program takes place in the title city and the player can choose between two famous policemen - Sonny Crockett and Ricardo Tubbs.

Vietcong: Purple Haze is a special edition of the highly acclaimed tactical first person shooter (FPS) - Vietcong, produced by the Pterodon studio. In addition to the base game, the package includes the Vietcong extension: Fist Alpha, introducing new storylines, additional missions and maps, as well as optional weaponry.

Unreal II brings a continuation to a classic FPS game released in 1998. The second installment was created by Legend Entertainment, and contrary to the spin-offs developed in the meantime (Unreal Tournament) it was created specifically to deliver a single player experience. The player takes on the role of John Dalton - an ex-soldier and a law enforcer, who patrols a distant sector of space aboard a vessel named Atlantis.