The third installment in the futuristic series of shooters developed by Epic Games. The series is the pride of the Xbox 360 console. After the city of Jacinto, the last stand of humanity, is destroyed, COG coalition persists in its fight against the superior forces of the Locust. Marcus Fenix and his companions set out on a journey to find the protagonist's father, who has knowledge of what might be humanity’s last hope to defeat the enemy.

A sandbox action RPG developed by Capcom. The player assumes the role of a chosen one whose heart had been torn out by a dragon. The protagonist somehow staved off death and embarked on a challenging journey to uncover the truth about himself and his destiny. As befits a true action RPG, the gameplay of Dragon’s Dogma is based on exploration, questing, and fighting. In combat, we will face many legendary beasts such as hydras, griffons, or harpies.

A futuristic, third-person shooter by Epic Games – the creators of the bestselling Unreal series. The action takes place on Sera, a planet, devastated by a long war for power sources, resembling Earth. In the result of aggressive prospecting and exploration, hostile monstrosities called Locust started to appear on the surface of the planet and killed 80% of human population. 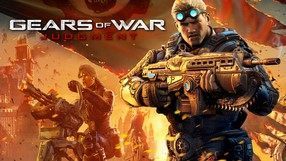 The fourth installment in the series of glamorous action games that focus on the war between humans and the dangerous race of Locust. The game was developed by Polish studio People Can Fly (Painkiller, Bulletstorm, and other titles) that belongs to Epic Games. Gears of War: Judgment is a prequel to the story shown in Gears of War. The main protagonist is Damon Baird who, together with his brothers in arms – Augustus Cole, Garron, and Sophia, is falsely accused of treason.