Yuke's Media Creations, a company known for its wide range of wrestling games (including WWE SmackDown on Playstation and WWE WrestleMania on GameCube), enters the Xbox 360 market.

NBA Ballers: Chosen One is another game that gives us the opportunity to compete against the best players on the NBA dance floor. The latest version of Midway basketball is the third part of the series on stationary consoles.

Section 8: Prejudice is the second part of the First Person Shooting (FPS) by TimeGate Studios developers. The action of the game was set in the distant future, when the Earth is threatened with danger from the Cosmos. Players take on the role of Alex Corde, a soldier of an elite unit who treason to discover who is behind a series of betrayals threatening humanity.

A gambling game. We join nineteen different variations of the title poker. We participate in both professional poker tournaments and have fun playing simple mini-games. 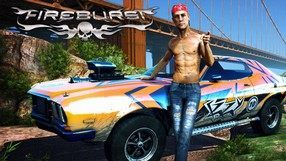 Race shooting action by exDream entertainment. In the game we play the role of one of the drivers participating in a crazy race, where what counts is not just overtaking the opponents, but getting to the finish line safely. Multiplayer mode and Unreal 3.0 engine graphics add to the game of panache.

Strike Force: Red Cell is a de facto developed version of the popular PC modification of Unreal Tournament 2004. The theme of the war on terrorism, which we are waging from the first person's perspective, is again on the wallpaper.

Power Gig: Rise of the SixString

A surreal adventure game about the painter Axel and his four-legged company Pixel. The characters accidentally enter the world of images and have to find their way back. The game is divided into 24 levels, where we have to solve simple puzzles and safely lead the characters to the exit.

NBA 2K6 is another episode from the popular series of sports games, the producer of which is Visual Concepts, and the publisher of 2K Games. Although this year the game does not have an ESPN license, as the station was in agreement with EA Sports, it has many improvements and implemented trinkets that speak in its favour.

Urban Mysteries is a non-linear action game with adventure elements, in which we observe the game from the perspective of a third person. ZeitGuyz Game Development studio is responsible for the title.

NCAA Football 09 is the next part of a series of simulators of American Football, a sport that is loved by the people of the United States and little-known in Poland.

Voodoo Dice is a puzzle game with arcade elements created by Exkee studio. Using the title dice of the wudd, players overcome the boards full of traps and puzzles, trying to reach the cube crowning the game. The creators of the game predicted 60 different levels in 4 scenes, on which a maximum of 4 people can compete.

Deathbringer is an ideological continuation of Puzzle Quest, a program that combines fictional and strategic elements in an interesting way with a captivating and not complicated Bejeweled logic game.

Teenage Wasteland is a typical action game set in pseudo- catastrophic realities. After the deaths of all adult citizens, the beaches of California are overtaken by chaos and lawlessness.

Jimmie Johnson's Anything with an Engine

Jimmy Johnson's philosophy is that he could race on anything but the engine. According to this thought, the game created by Isopod Labs allows you to race sophisticated vehicles along twisted routes.

Arcade game in which we play as the manager of the dwarf mine. Our responsibilities include directing the extraction of raw materials, fighting against enemies and facing the elements.

Add-on to Dante's Inferno. The DLC has introduced a cooperation mode, in which together with other friends we can play a battle in one of the specially prepared arenas. One player can play St. Lucia, assisting Dante in his special attacks. The second novelty is the editor of the previously mentioned arenas and scenarios, which we can share and pass with other players.