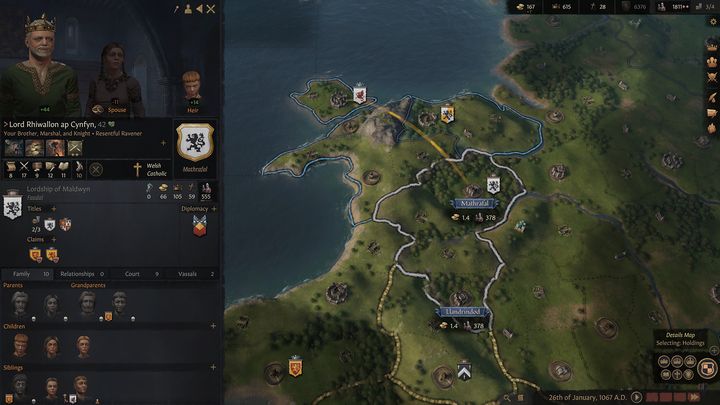 Crusader Kings 3 will be more accessible, but not easier.

Paradox Development Studio, the devs of strategy game Crusader Kings III want the title to be more accessible than the previous installment. It doesn't mean that the game will be easier, but learning the basics is to require less of the player and the interface is to be more intuitive. The information was provided in the latest video summarizing the progress on the game.

"We have put a lot of effort into making the interface more accessible. All so that the difficulty and complexity of the game would depend on how the game is played and the use of good strategies instead of things like looking for a number you need, bringing up the tooltip to get some information, or googling what a particular term means," said programmer Matthew Clohessy.

One of the interface improvements will be more elaborate hints, so-called tooltips. We will often be able to expand them to get additional information - in other words, Crusader Kings 3 will offer hints for other hints... To be honest, this doesn't look like an ideal of accessibility, but it can't be ruled out that it will actually make our lives a bit easier, especially in the early stages of the game, when we begin to learn various mechanics.

The learning of basics should also be facilitated by a tutorial, which this time will guide us through the complexities of various systems. In addition, the game will do a better job at marking serious events - issues that require immediate player's attention will be properly highlighted so that the players don't miss them by accident. It's worth noting that all of the described fixes will also be available to modders - they will be able to use them while working on their content to make it easier for players to enjoy the game.

We woud like to remind, that Crusader Kings III will be released this year. The game will be available only on PC (on Steam, but also on Xbox Game Pass).