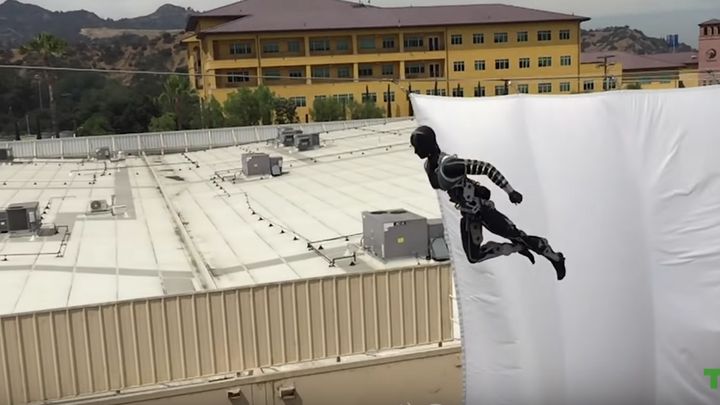 In 2018, Disney shared its latest invention to help shoot complex action scenes in high-budget films. We're talking about Stuntronics, which are robots able to perform a lot of stunts, like jumping an entire building in a few seconds. The project is already in the testing phase, and its true capabilities are presented in the video below:

The advantages and disadvantages of the robots have been analysed very carefully on TechCrunch. Despite their appearances, they are very static machines, designed to jump from point A to point B, and make some acrobatic figures on the way. In their movements they resemble superheroes, so Marvel Cinematic Universe can get another tool to make its movies more attractive. TechCrunch asked Morgan Pope about the project, one of the scientists at Disney Research, and received the following answer:

Often our robots are in the uncanny valley where you got a lot of function, but it still doesnt look quite right. And I think here the opposite is true. When youre flying through the air, you can have a little bit of function and you can produce a lot of stuff that looks pretty good, because of this really neat physics opportunity  youve got these beautiful kinds of parabolas and sine waves that just kind of fall out of rotating and spinning through the air in ways that are hard for people to predict, but that look fantastic.

Okay, it's been 2 years since then, so how is the technology doing now? On July 18, during the Avengers Campus event, Disney wanted to present the stunt robots in action. It was there where the machines were supposed to impersonate Spider-Man and perform stunts typical of the character, i.e. traveling across roofs and web swinging. Due to the coronavirus pandemic the presentation could not take place as planned. You can learn about the details of the show here.

Cheater Ring in CS:GO Kept Itself Safe for Years While Banning Others