American Truck Simulator and Euro Truck Simulator 2 differ not only in maps themselves, but also in their size. One player decided to compare the areas available to players in both games. The winner turned out to be ETS2, although the other simulator is not far behind.

Gebead compared with each other the maps that are available in the games with all available DLCs. As you can see, the advantage is currently with ETS2. However, the author claims that ATS can surpass the European edition of the simulator over the next few years. This is, of course, about the potential of yet unreleased DLCs. 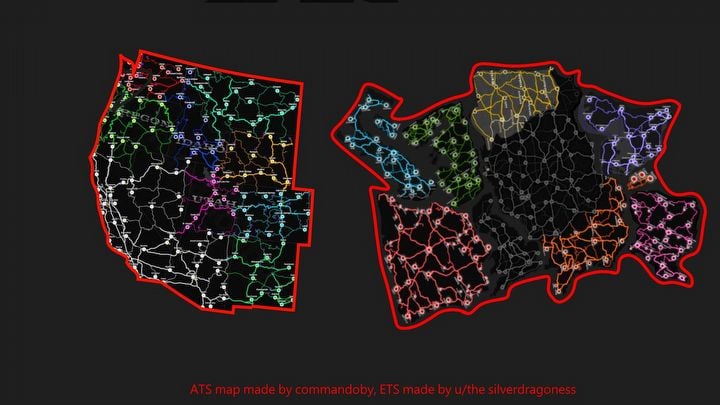 Nevertheless, it should be noted that maps in ATS and ETS2 differ in the scale, in which they were transferred to the games. In the case of the former it is 1:20, and in the latter 1:19. The only exception is the British Isles, whose scale is 1:15.

The impression is also affected by speed limits on the roads. As one player mentioned, driving from one end of ATS map to the other takes about 3-4 hours, while in ETS2 it can take up to half a day.

At this point it is worth mentioning DLCs that enlarge the map. Currently, for ATS there are eight such expansions. The latest of these, released on August 4, adds the area of Montana. What's more, Texas DLC has also been announced, although its release date is not yet known.

Map in ETS2 is currently being expanded by seven DLCs, the latest of which is the 2021's Iberia. The next in line was to be Heart of Russia, however, simulator players will not see the DLC until the end of the war in Ukraine.

Also announced was West Balkans, although its release date, as in the case of Texas, remains unknown.

ProMods for ATS and ETS2

One more thing that play an important role on the subject of maps in ATS and ETS2 is ProMods. This is a project that brings new regions to both games, such as Canada, Syria, Ireland, Cyprus and the Faroe Islands. In addition to simply expanding the games' content, ProMods also improve the appearance of cities already present in ATS, ETS2 and their DLCs.

If you would like to learn more about this topic in detail, you should take a look at ProMods' official website. Published there are the latest information regarding upcoming expansions and improvements to the project.

At the very end, it is worth noting that Steam has a Publisher's Weekend going on, related to SCS Software. As part of this action, you can buy both games and additional content at bargain prices. All discounted products can be found here.