Yesterday we informed about a big screenshot leak from Resident Evil 3, which Capcom is working on. Today, however, a large dose of fresh information has been released on the Internet, accompanied by new video materials presenting the game in action. Before we move on to discussing them, we have to mention that the title will get a demo version, as revealed by the devs via Twitter. However, it is currently unclear when it will be made available.

In addition, our fellow editor had the opportunity to spend three hours with the game, during which he checked both a part of its story campaign and played the online module, called Resident Evil: Resistance. According to his opinion. the multiplayer mode is a pleasure to play, the game was created parallel to the remake of the second part of the serues, and knocking out (even temporarily) Nemesis can bring to mind "relief and satisfaction comparable to that of defeating Owl from Sekiro". 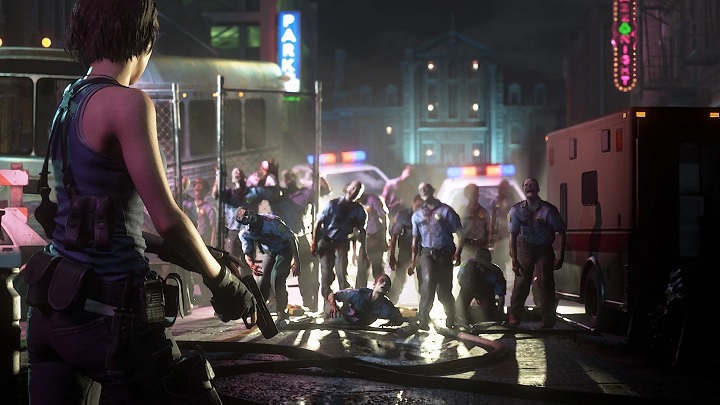 Even the biggest hordes of zombies don't pose as much of a threat to Jill as Nemesis.

As you can read on the official PlayStation Blog, while working on the remake, the developers have taken a closer look not only at the graphics (which is referred to as photorealistic), but also on Raccoon City itself. Compared to the original, the city has grown considerably, making the various levels more spacious, the streets wider and more "open", and the heroine can visit locations not available in the original, such as a devastated metro station, the canal maze or various shops.

The devs also worked on the range of protagonist's movements. Jill can perform rapid dodges against enemy attacks, and if she manages to do so, time slows down, while we gain the ability to launch an instant counterattack. Besides, Miss Valentine uses her surroundings to gain an advantage over the zombies. A shot in an explosive barrel results in a devastating explosion, and placing a few rounds in a junction box will deliver an electric shock to all the undead in the vicinity.

Nemesis, or our main antagonist in the game, has become more powerful and obsessive than its counterpart from the original, so that neither those who know the original like the back of their hand nor those who completed the remake of the second part (and had some close encounters with Mr X) can feel safe in his company. In case of a direct confrontation with this opponent, the afoermentioned barrels and electric boxes will prove useful to save ammunition. It will be worth stunning him (and not running away from him in panic), because from time to time he will drop a box of supplies, among which we will find useful weapon mods, such as a laser sights, larger magazine or silencer.

It is also worth mentioning that there will be a special mode (Assist Mode) in the game, in which the heroine's health will regenerate, enemies will be weaker, and there will be more ammunition available. It is worth adding that it will take the place of the original Easy Mode.

Finally, Resident Evil 3 will launch on April 3, on PlayStation 4, Xbox One and PC.