Few days ago Hitman was added to GOG.com's offer. The game is already over five years old, so no one rather expected that the release in the store will cause any excitement. However, the reality turned out to be different and title unleashed a big scandal.

The players review bombed the game on GOG.com. Currently, the average user rating is only 1.4 out of 5 stars. Most of these reviews criticize the fact that to fully enjoy Hitman we need an Internet connection. This is because, without the network, many elements of the project are inaccessible. The rage stems from the fact that a unique feature of the store is the lack of DRM measures in the titles sold there. Many people believe that the new adventures of Agent 47 break this tradition.

Gamer fury is especially visible when we compare these 1.4 out of 5 stars with the average rating of the industry media for the game, which is 83% (on Metacritic for PC version). On Steam, in turn, among the notes given by buyers in the last 30 days, as many as 91% are positive. Only GOG.com users are upset and their rage stems from the belief that Hitman embezzles the principles which are the foundation of the service. 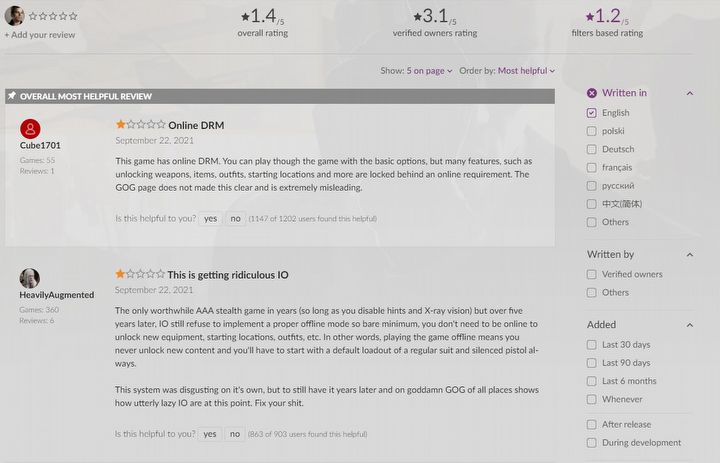 The title can be played offline, enabling us to complete missions from the story campaign and bonus missions, but an Internet connection is required to enjoy additional challenges, including so-called elusive objectives, escalation mode, or player-made contracts. The online nature of these elements was accepted by users at launch, but they insist that a lot of time has passed since the game's market launch and the development stopped long ago, so IO Interactive should rework the game so that the entire content is available offline.

The affair escalated to such an extent that a representative of GOG.com had to take the floor. In a message to players, she said that their opinions have been noted and in a few weeks we can expect news on whether a way out of this situation will be found. She stressed that the phenomenon of review bombing will not be tolerated and those dissatisfied should simply return the game.