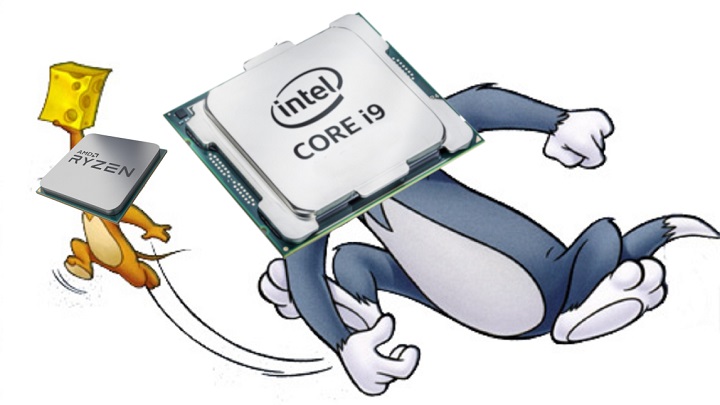 And so the wheel game goes on...

At this year's Computex, Intel mentioned that it intends to change the way it tests its processors and instead of relying mainly on synthetic benchmarks, it will use scenarios from everyday life. That's what happened, and Intel show on published materials that their processors are faster in all tests except Cinebench R20.

"We're the better ones!" - everyone calls out.

The tests consisted of testing the performance of popular applications that users use on a daily. The results of the trials are to be less detached from reality than the results achieved in the benchmarks, which, according to Intel, are of real importance for a very narrow group of users. The manufacturer claims that the popular Cinebench reviewer has ever been launched by just 0.54% of users.

We have to admit that the results are at least interesting. You can see that Intel is once again trying to prove to a wide audience that their chipsets are better in everyday use. This should not be surprising, however, in a situation where "Chipzilla" have become the second choice in professional applications and server solutions.

In Sysmarku 2018 Core i9-9900K was 7% better on average, and Core i7-9700K was 3% better than the chip from AMD. AAA gaming performance tests also came in favor of Intel, where ninth-generation i9 and i7 processors were 6% and 2% faster than the flagship AMD chipset, respectively. The situation was similar in the computer-oriented benchmark (SPECrate2017_int_base 1T), where Intel chips were 9% and 6% more efficient in turn, and in the WebXPRT 3 (Edge) test, where Core i9 scored 3% better and i7 equaled 3900X. For comparison, the results from Cinebench R20, where the newest Ryzen 9 basically swept away the competition, were also included.

In terms of gaming performance, the CPU from AMD won only in Assassins Creed: Odyssey and Ashes of the Singularity. In other cases, the results were comparable or indicated by the Intel chipsets.

Intel also decided to boast about the performance of its memory controller (IMC) in the liquid flow simulation test. In this case, Core i7-9700K completed the calculation in 15 minutes, when Ryzen 9 3900X needed 17 minutes to complete the task. This particular test is largely based on memory performance. Intel explains that a better performance of their processor is a matter of less delay. For Core i7 9700K, the latency between core and memory is 62 ns, and between core and core is 44 ns, when the Ryzen 9 3900X results are 75 and 78 ns respectively. 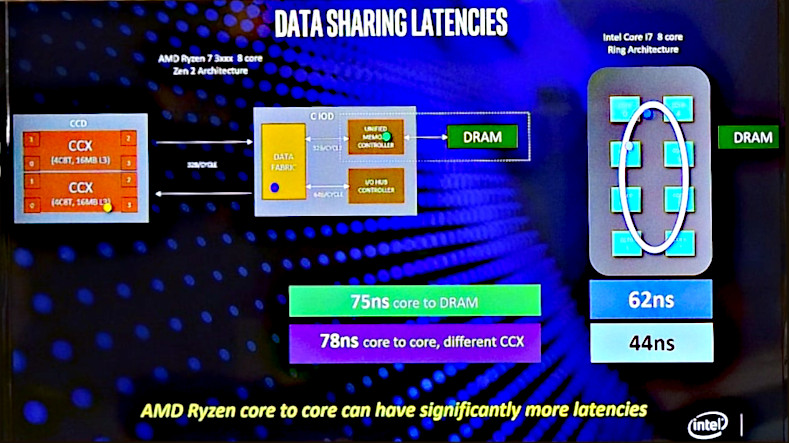 There's a lot of marketing here.

A year ago, when we launched the i9 9900K, it was recognized as the fastest gaming processor. I can honestly say that nothing has changed yet. It's still the fastest hand to play games. Competition has been making a lot of noise lately, but we conducted tests based on real-world scenarios, not synthetic benchmarks, to see how the games actually work on our platform and compared the 9900K with the Ryzen 9 3900X. Their system has twelve cores and our eight cores. So I repeat, you hear a lot of things from the competition. But I'll be very, very honest and admit that they did a great job in reducing the loss, but it's still our processor that offers the best gaming performance and we're going to maintain that advantage," said Troy Severson commenting on the test results.

Intel tries to prove its superiority by quoting the results of various tests and creating lists showing the frequencies of work in boost mode. However, we must not forget that "every bit of the tail praises its tail" and this type of tests should be approached with caution. Numerous independent reviews show that the situation is quite different. It has to be said that Intel cleverly navigates by showing what it wants to show and avoiding even situations where the performance of a single core plays an important role. It should not surprise anyone, however, that the 'Blue' are trying to capture the attention of consumers when they have been overtaken in many markets in terms of sales by rivals and the internal note that leaked some time ago clearly shows that the company is afraid of competition from AMD.