Recent reports from VideoCardz show that Nvidia has released the GeForce RTX 3060 driver intended for the press, enabling users to test the upcoming GPU. It was tested in the popular game benchmark Ashes of the Singularity,where its performance is no longer a secret. So how does the RTX 3060 compare to the RTX 2060? 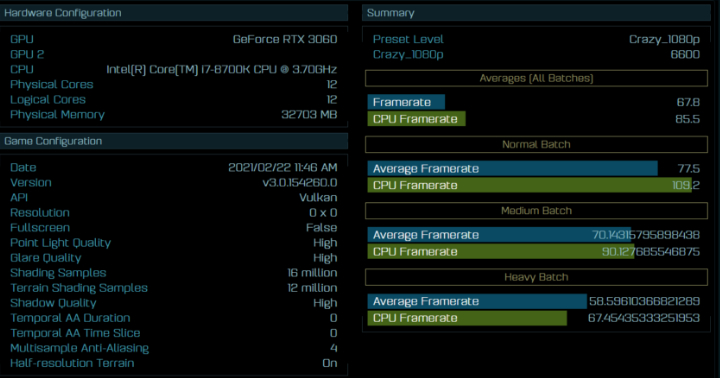 The first test result in Ashes of the Singularity - you can guess that the RTX 3060 was running on default settings.

The GeForce RTX 3060 was tested twice, both times on an Intel Core i7-8700K processor and Crazy settings at 1080p. On the first attempt, the new chip scored 6600 points and an average frame rate of 67.8 fps. The second time, on the other hand, the result was 6800 points and 69.8 fps. The better result may be due to the fact that the card was overclocked, which positively influenced its performance during the second test; alternatively, a more powerful non-reference model with factory OC was used (by the way, it's worth mentioning that the RTX 3060 Founders Edition from Nvidia will not be available for sale). 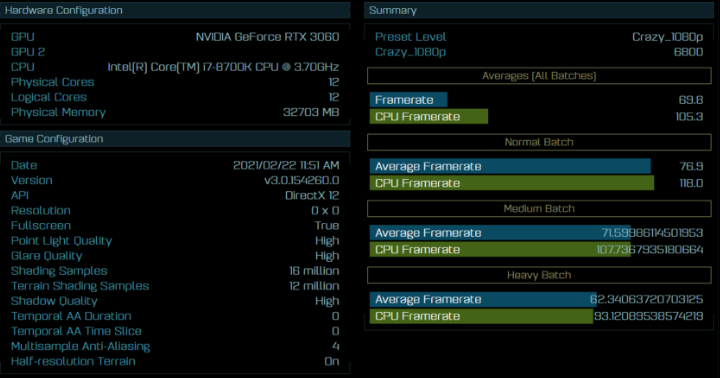 In addition, the achieved performance was compared to GeForce RTX 2060, which turned out to be 19% weaker than the new Ampere. The tested chip is also faster than the RTX 2070 - outperforming it by 9%, which indicates that the new model can be quite a nice mid-range card, equipped with 12 GB of GDDR6 memory. Of course, as long as its price will remain around the MRSP, which is currently quite doubtful.

There is not much time left before the release of Nvidia's new card - its launch is set for February 25, 2021. On that day we will also see benchmarks in games published by independent websites. And while everyone is usually happy that new GPUs will hit the stores, the problems in the global market strongly dampen our enthusiasm and optimism. We should expect higher prices than those suggested by the manufacturer due to the poor availability of all GeForce RTX 3000 models and the increased interest in them from cyprominers who already have access to the new cards. It remains to hope that the additional restrictions imposed on te GPUs will at least discourage miners from buying the card. We'll see how the situation looks like after launch.

New Season of Fall Guys Will Take Us to Year 4041