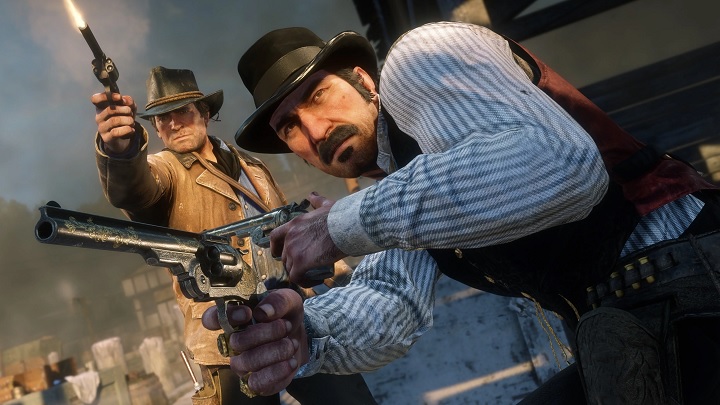 Fitting Red Dead Redemption II in your pocket, without hiding in the "cloud" is very unlikely.

The Spanish online store Instant Gaming has added the Nintendo Switch version of Red Dead Redemption II to its offer. On the product card you can read that the latest work of Rockstar Games will be available on the console later this year. Although the description referring to the PC version seems to indicate that we are dealing with an accident, the title received its own cover with Nintendo Switch logo. Still, you can safely assume that it is just a fake. Why? Well, there are two reasons.

The first one is the insufficient capacity of Switch's cartridge, which simply wouldn't fit a game that required two Blu-Ray discs on PlayStation 4 and Xbox One. Another thing is that once installed, Arthur Morgan's adventure takes up about 100 GB of disk space, which significantly exceeds the amount of free space available even to Nintendo Switch owners who got memory cards. Yes, some developers have done some real wonders when porting their games, but it is safe to assume that porting Red Dead Redemption II would be much more challenging, even for the best companies, than, for example, The Witcher 3: Wild Hunt.

Let's face it - the chances of Red Dead Redemption II ever hitting the Nintendo Switch are extremely slim.

As for the second reason, Instant Gaming's offer includes two games that so far have only functioned in the sphere of rumor. The first one is Grand Theft Auto VI, which is said to debut in 2022. Late, right? "Luckily," according to the store's staff, fans of Rockstar's work will receive another production from them this year, that is Bully II. Of course, the product cards lack any specific data about the games, except for replacement covers and bogus release dates. And no wonder - after all, Rockstar Games has never confirmed that they actually work on such projects.

It should not be forgotten that GTA VI and Bully II exist only in the realm of rumors and speculation.
video gamesstores Rockstar Games rumours and leaks PCPS4XONESwitch