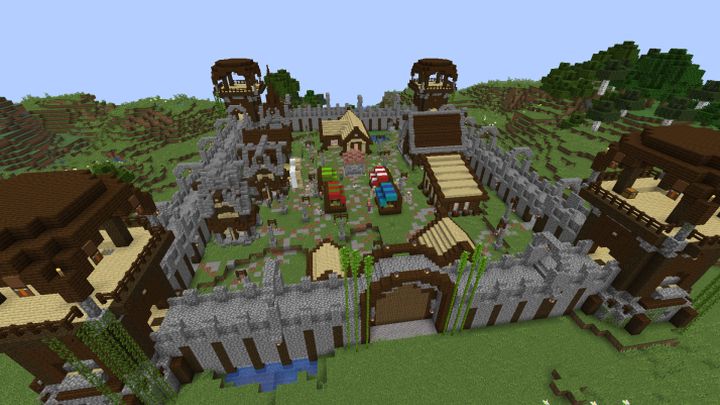 Minecraft has received a major update.

If you haven't looked at Minecraft for some time, we encourage you to check out Mojang AB's game once again. Portal Rock, Paper, Shotgun reports that it has recently received the Village & Pillage update, described as the biggest patch in the history of the title. The patch brought a lot of new things, such as competitions, crossbows or... pandas.

The update has also added a new faction of pillagers to the game, who can attack villages built by players. The new NPCs move around the map, but they also have their own bases in the towers. Inside we will encounter the so-called Illager Captains (no, it is not a typo) - if we defeat them, the pillagers will come to exact vengeance and we will have to defend our village against them next time we visit it.

There will be some things worth defending because the villages have also been given a lot of changes and novelties. New styles of architecture and fashion have appeared, and the residents have been given the opportunity to perform professions that were unavailable so far (such as Mason or... Nitwit). From time to time, the village can also be visited by a wandering merchant offering goods from exotic lands. The characters also received daily routines according to which they function - in the morning they get up and go to work, at night they return to their homes to rest. In addition, players have the ability to build a special alarm bell, which will warn residents of threats (such as an attack by dandruff).

The update looks a little different for each Minecraft version, so it's a good idea to check out the complete list of changes (here for the Java version, and here for Bedrock). More detailed description can be found here. Below you can also see the trailer.