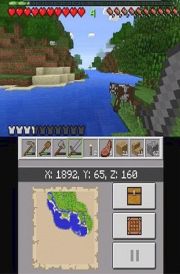 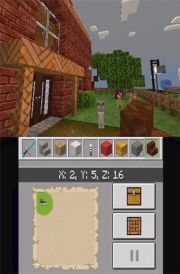 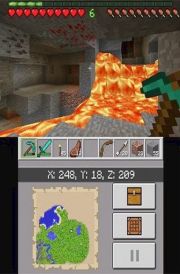 Minecraft is a unique production, which - although it's basically a sandbox - defies the classic genre classification. Game is built on crafting mechanics and offers a lot of freedom - players can create various items, buildings, structures and locations, and even entire cities. It was developed by Mojang Studios, which was bought out by Microsoft in 2014.

In Minecraft we observe the action from a first-person or third-person perspective (where we have control over the distance of the camera). The gameplay is about exploring locations and collecting materials (we do it by playing as a miner), from which we can create anything we want - weapons, tools or buildings.

The game is essentially a big sandbox that doesn't limit the player's freedom in almost any way. We are thrown into a procedurally generated world made entirely of three-dimensional cubes (there are dozens of different types of them in the game, each with own characteristics, suitable for different purposes), which we can influence to a very large extent. In some game modes we can also fight monsters apart from building – we use self-made weapons for that.

In the middle of 2021, the biggest Minecraft update to date was released. Well, half, at least, because the giant Caves & Cliffs Update was finally split into two parts. The first one debuted on June 8 and introduced a lot of content. A number of new block types entered the game, including copper, iron, and gold in their raw state, as well as Deepslate, which is both a previously absent harder rock type and an alternative variant for all metals. Snow fluff, dripping leaf, amethyst (including in geode form) and azalea, among others, also appeared.

The first part of Caves & Cliffs also features a bunch of new mobs. Goats (including more aggressive "screaming" variants) and axolotls appeared in the game world, as well as a glowing squid. Minecraft has also added useful items such as a multi-use vibration detector (sculk sensor) and candles. In addition, the Mojang team has made minor changes to the world generation, although the bigger news in this area is reserved for the second part of the update.

We can play Minecraft both solo and in multiplayer mode. The game allows you to play locally on your own hardware, but we also have the option to host a server for other players or use an already existing one. It's worth noting that some multiplayer servers of Mojang Studios productions have been running for many years and include entire, expansive worlds with very active communities.

Additionally, Minecraft gives players a choice as to the nature of the game. In Creative mode we can create new constructions without stress. Survival, on the other hand, is designed for those looking for a bigger challenge. Players who choose it can feel safe only during the day - when night falls, monsters appear and only proper preparation can save the heroes from death.

However, if someone wants more challenging gameplay, there's always Hardcore, a harder survival variant with permanent death. Adventure, on the other hand, is a mode focused on experiencing the maps created by the community and significantly limiting the possibilities of players (among other things, you can not directly place and remove blocks), but allowing them to interact with the environment and mobs in other ways.

Minecraft has a very distinctive three-dimensional graphic design. Both the game world and the creatures moving around it consist of large, cubic blocks, often covered with low-quality textures (pixels are clearly visible). Despite this, the game has its own style and can sometimes look surprisingly good. It is also worth noting that although the base version of the game is quite simple in terms of technology, in 2019 an update debuted on PC that allows you to activate real-time ray tracing on hardware that supports this technology. This significantly changes the look of the game, taking the graphics to a whole new level.