Bigben Interactive has announced the WRC 8 game under the supervision of the Kylotonn team. Production is aimed at PCs, PlayStation 4, Xbox One and Nintendo Switch, and its premiere is scheduled for September 2019. In addition to the spectacular trailer you will find below, specifics about the content of this title have been shared.

Let's start with the fact that WRC 8 will include all the cars and teams that will take part in the real WRC 2019 season (such as Citroën Racing, Toyota, Hyundai Motorsport and M-Sport Ford), as well as the drivers, led by Sébastien Loeb, who will be returning this year. In addition to the WRC class, this production also includes WRC 2, Junior WRC and yet unspecified historic vehicles. Individual cars will be able to undergo modifications on a much larger scale than before. We will be able to drive in more than a hundred special sections located in fourteen countries (the list of which will include Turkey, which is visible on the trailer).

The authors also convince that the title will be able to boast high quality graphics, smoother pilot tips, an improved driving model and finally an extended career mode. In addition, developers have developed dynamic atmospheric conditions to provide an element of randomness, while at the same time increasing realism. These are not only supposed to be a graphical "marvel", but also have a real impact on driving, so that players will have to adjust their four wheels to the current weather (and prepare for the future, using the team's tips). 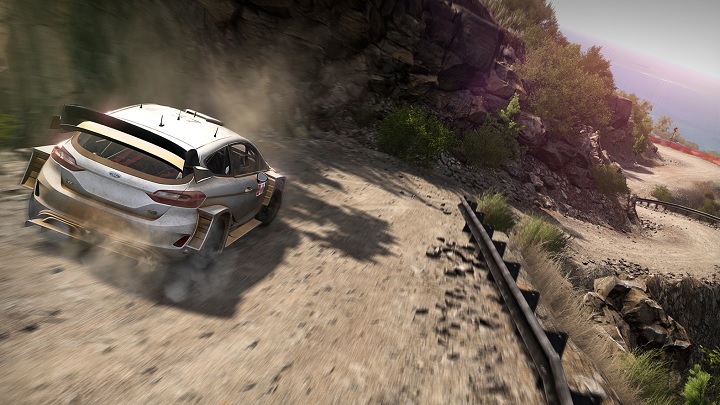 WRC 8 is going to introduce a number of novelties and improvements, including nicer graphics and dynamic weather conditions.

It seems that after a year's break (in 2018 the Kylotonn team delivered V-Rally 4), both developers and publisher have big plans for the development of the WRC brand. Time will show how WRC 8 is going to cope with the competition in the form of DiRT Rally 2.0, that has a release in February.