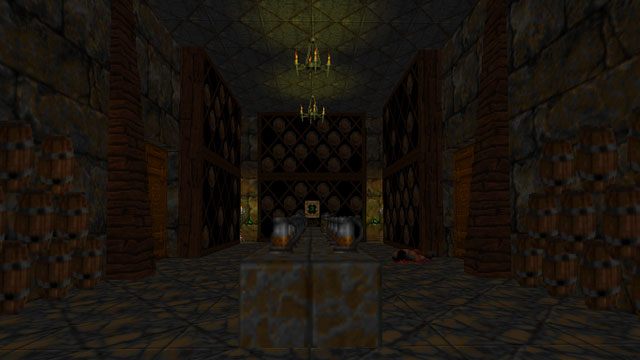 Serpent: Resurrection is a mod for Hexen: Beyond Heretic, create by TheUltimateDoomer.

Serpent: Resurrection is a very ambitious mod for Hexen created by The Ultimate DooMer. Using GZDoom features and a fully scripted RPG system, this 25-map adventure really brings the characters to life, as well as bringing all three Serpent Riders together for the first time in a proper RPG fantasy world!

Within the shrine. Serpent: Resurrection alters the normal gameplay of Hexen greatly. The game starts by "rolling up" the attribute scores for the character. Attributes are Health, Strength, Dexterity, Constitution, Wisdom and Sorcery; and each class has its own cap to these scores. Killing monsters gives XP and lets you loot gold pieces, making your character level up and allowing you to buy more equipment in the shops.

The new features used by this mod require to set up a few keys to new functions, notably for the weapon slots 5-to-7 and to use the statistic and level-up screen. In addition, if the SBARINFO HUD is too small to be legible, use "puke 809" in the console to use a scripted HUD with larger fonts. If the music does not play after loading a savegame, use "puke 808" to restart it.

7 weapons for each character instead of 4.

An RPG system, with experience, level breaks and customisable attributes.

A magic system with 10 spells and a variable ability to cast them.

A monetary system with buying and selling.

A ton of new monsters, graphics and sounds.

Another time, another world.

After Banedon's defeat of the Shadowcaster five years ago, things in Durenor got relatively peaceful, until war broke out with the neighbouring Darklands recently, which has put the King's armies under a lot of strain. Banedon had put his adventuring exploits to one side, and helped set up three schools of excellence - one specialising in straightforward combat, one focusing on harnessing the powers of religion, and the other schooling in the magic arts. These will soon produce three classes of adept soldiers known as fighters, clerics and mages. All of which will serve King Rimoah and the land of Durenor when trouble arises, and will have the potential to become great heroes of Durenor, like Banedon.

But recently the King's mages have detected powerful surges in the magical spectrum, and these emanated from the island of Caldera in the neighbouring kingdom of Hydratyr. And when they discovered what was causing it, they immediately summoned a meeting with the King. They told him of the legend of the Serpent Riders, a trio of powerful individuals who at one time caused carnage and chaos in distant lands. They were all defeated long ago, but it is believed that a resurrection was attempted some time ago by a rogue mage known as Praevus, who was defeated by unknown heroes. But, it is also believed that since then, someone else has somehow succeeded in freeing their souls and the magical disturbance at Caldera was caused by their return to this world!

Because the schools of excellence had not yet produced their first class of fully-trained soldiers, Banedon himself went to the island a fortnight ago, but nothing has been heard since. Fearing his capture or death, the King decided to choose from the best students at each of the three schools of excellence - Anvar from the combat school, Braxus from the religious school and Sallazar from the magic school. He also controversially asked the Assassin's Guild, who he would never normally have any dealings with on moral grounds - and a young woman called Qinefer was chosen as their best student.

One of them was summoned to the palace (you choose ofc) and currently waits in an anteroom for his/her audience with the King...