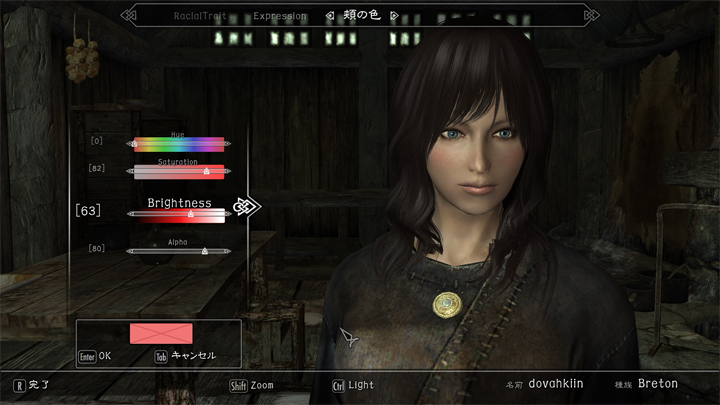 Description (in authors’ own words)

Marge the function of CME, "Character Making Extender" by kapaer

This mod adds more than 50 new sliders (without beast race).

Almost vanilla parts for get easier to create a character.

- Human female cheeks are rounded. It can be turned off when installing.

You can select a color from the slider, such as transparency, brightness, hue and brightness.

It can be changed the facial expression.

Combat- and -Mood can be reset by the mfg reset in console or run the Showracemenu.

Other facial expression slider not reset same as other modelling slider.

Zoom on with the Shift key.

You can switch levels of light to five steps by Ctrl key, such as white, yellow, bright white, bright yellow and off.

Can be changed FOV and camera direction

Numeric display for all sliders

You can save the face you make in the slot when you exit the showracemenu.

Saved-slot can be called from the Slot Load slider.

It can be adjusted a vertex position. It supports human mesh of vanilla.

I recommend using a mouse.

When you select Vertex Edit category, show a UV map on the lower center, so you can choose a vertex.

You can scale the map on mouse wheel.

You can adjust a selected vertex by dragging crossed arrow or moving xyz sliders.

If you want to stop the player's animation, type "player.sae idlestaticposeastart" in console. I recommend making a batch file.

Mirror edit mode(x symmetrical) is default. It can be toggle in the slider.

When you move a vertex, you can edit range to be moved at same time apex of that around.

The type of interpolation can be specified following mode.

Vertex does not confirm edit until you change a selected vertex.

If you want to edit the same vertex, you will need to be re- selected once.

Revision history listed on the left side, you can undo/redo freely by clicking.

Undo is recordable up to 50 times.

You can scroll through the history with the mouse wheel.

You can also move one at a time with PageUp / Down on the keyboard.

Some operations are not listed in revision history.

YgNord's male is more younger face than nord one.

This race uses different (and independent) folders in both textures and meshes.

You need to put manually the files you want from various body/face mod.

These features cannot be available when you select "incompatible package" in installer, alternatively it does not conflict with any mods which edit race record (such as SkyRe Race).

Human and Bosmer only.

One freckles, and three patterns of moles x 2 are added to female complexion slider.

If you install with dawnguard, vampire's face replaces with dedicated textures.

it does not apply to player, because it causes a neck seam.

It is the same fix as "Vampire Skin Color FIX".

Instead, vampire's eyes do not apply to player.

In some case, DLC Dawnguard

Don’t forget to install the scripts of “Data folder” of SKSE !