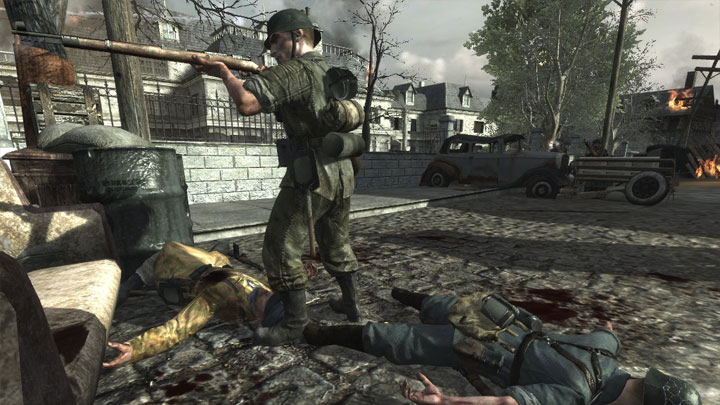 Ring of Steel: Abandon All Hope is a mod for Call of Duty: World at War, created by FeReise.

"Citizens of Berlin! A ring of steel surrounds your rotten city! We will crush all those who dare to resist the will of the Red Army! Abandon your posts! Abandon your homes! Abandon all hope! URAAA!!!" - Commissar Markhov. This mod specially made for one single mission, the RING OF STEEL, but it's ok if you want to try it on other missions. Just don't play this mod on NON-STEAM version, that's all.

This mod changes pretty much of everything about models/AIs in the Russian campaign, especially for Axis side. (similar with the Fall of Berlin mod) But now it's a combining between Luftwaffe (Air Force), Heer (Army) and a few Volksstrum (Home guard).

Due to the historical facts/related information that the 9th Fallschirmjager Division (some paratroopers veteran mixed up with so many of Luftwaffe cadets/trainees, most of which have no combat experiences at all) were defending the northern/north-eastern areas (possibly including Pankow district as well, which is the Ring of steel mission's setting) of Berlin during the battle.

But I believe there should be more than just paratroopers and Luftwaffe personnel units that were defending those areas, so I've included Heer units (based on those from 18th Panzergrenadiers Div., 20th Motorised Div. and Munchenberg Panzer Div.) and few Volksstrum men to join the battle also.

This mod has a similar changing and replacement stuff with the Fall of Berlin mod, so I'll just list what is really important into this article.

1. Increase and change model variations on both side

3. Increase weapon variations on both sides (Kar98k will still be a common firearm for Axis forces)

You can play this mod on every mission for Russian campaign if you want. But for a more authentic experience, we'd suggest you play it only on the RING OF STEEL mission.

Ring of Steel mission = Either this mod (Ring of Steel: Abandon all hope) or Fall of Berlin mod

The rest of Soviet vs Axis missi of Berlin mod

And remember, DO NOT play this on NON-STEAM version