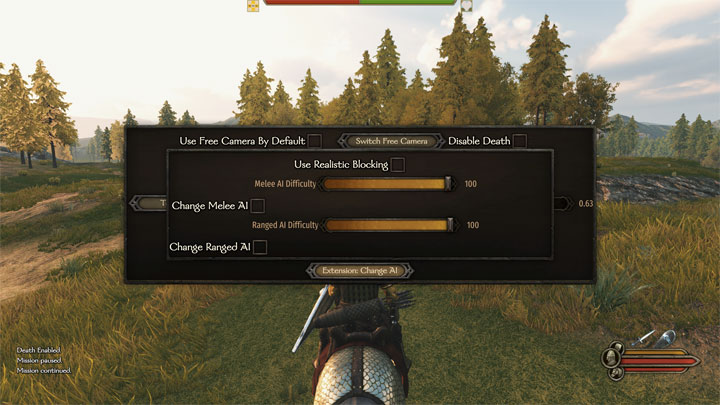 A mod that allows you to adjust combat AI.

A mod that allows you to adjust combat AI.

Adjust combat(melee or ranged) AI difficulty between 0 and 100.

Combat AI level is a value in the game used to determine the soldier's combat ability.

By default combat AI level is determined by the weapon skill of soldiers: the combat level are equal to his weapon skill divided by 3.5.

So soldier with weapon skill of 350 has the highest 100 combat AI level when using corresponding weapon.

In this mod, combat AI level is increased by the value of melee or ranged AI difficulty, which you can adjust.

Be able to adjust combat AI level to any value between 0 and 100 directly.

Now in Single-player, It's only enabled for all the other characters except the player by default.

If you enable the option in this mod, then player will use it too.

With realistic blocking enabled, you block slower if for example your weapon is on the right side and you want to block on the left side.

Here is the description from official patch note b0.8.1:

"Actual defence starting moment after clicking the defend key now relies on a directional distance to the target direction instead of animation progression."

The main config is saved in file `MoreOptionsConfig.xml`.

You can modify them manually, but if you edit it incorrectly or remove them, the configuration will be reset to default.

Copy `Modules` folder into Bannerlord installation folder(For example `C:\Program Files\Steam\steamapps\common\Mount & Blade II Bannerlord - Beta`). It should be merged with `Modules` of the game.

Or use Vortex to do it automatically.

Improved Combat AI should be loaded after RTS Camera.

After entering a mission (scene):

Press `O(letter)` (by default) then click `Extension: Change AI` to open menu of this mod. You can access the features of this mod in it.